– At which point did you start making music? Had you been forced to play an instrument somehow or was it in your own interest? What was your motivation?
Hilke: I was brought up in a musical family, my father and my older brothers all played music. My father is a jazz freak and still playing, even in his 70ies. It was just a natural thing to do as a kid, and I have always been very active in music.
Sebastiaan: My grandfather introduced me to the Banjo when I was younger and i really loved stringed instruments. I started going to go to the music school at the age of 8 and I immediately wanted to play the guitar. At home there was always beautiful music playing and my parents were and are very interested in music.

– What musical influences do you have?
Hilke: I was brought up with classical music and jazz. As a teen I was completely into contemporary classical music. Later I made the switch to more ‘poppy music’. Wim Mertens and Dead Can Dance were bridge figures. Then I got interested in ‘break beat’ bands: Lamb, Roni Size, Massive Attack, 4Hero. And then came Björk, Sigur Ros, Radiohead and stuff like that.
Sebastiaan: I have a very open music taste that goes from acoustic to electronic music. I’m a big fan of Bibio and Flying Lotus, but I also love bands like Mice Parade, Alt-J, Beach House, Bon Iver, Bat For Lashes…

– How did you met and at which point did you decide to form a band?
Actually, we met at the music conservatory in Gent. In the beginning Inne was brewing some interesting demos in her bedroom and put some things on her MySpace page. She went to the same music classes as Sebastiaan and
Christophe and the two boys got fascinated by her stuff. They asked whether she was interested to work together on her songs. Later on, Hilke joined the band as double bass player, as they knew each other from jazz combo courses.

– How did you come up with the band name ‚Amatorski‘ and what meaning has it to you?
The name is inspired by Polish film makers such as Kieslowski (and his film Amator) and Polish culture in general.

– Your music is sometimes compared to bands like Sigur Rós, Sufjan Stevens, Portishead or Sparklehorse – how do you think about this and how would you describe your music?
It’s normal that people need references to have an idea what to expect, because nowadays there is so much music to go through. We don’t really mind because most of the time we are compared with great artists. But of course, most artists want to be recognized as themselves, as artists with their own identity. And we are no exception to that rule. From the other hand, there is so much, very different music that we like and that will indirectly influence us, that this whole story of musical references is also a bit ridiculous.

– How do you normally work on songs? What are the steps/processes, what are the usual problems of finishing a song?
This process is changing. Normally Inne comes with a demo and we start playing it during rehearsal and the song can go through many stages while we play it live (Peaceful e.g. has gone through a lot of versions). The last year, Inne’s ideas are less and less elaborated when she brings them to the band and the other band members have input at an earlier stage in the process. The songs that are on the record where played live for a long time before we recorded them. The recording and mixing process finally made them to a finished stage.

– In what situations do you write songs/lyrics/which themes inspire you to write songs?
In a first phase music and lyrics are separate entities – I often write short, isolated pieces of text, often inspired by things that happen to me or others, but sometimes it’s just fiction. I collect inspiring things that I read or see, I take pictures and these things can grow into lyrics for a song. Music is something that we make each day. Usually, it springs from a certain emotion or instinct. Now we are making music for soundtracks and we also get inspired by certain emotions. When we actually create a song, lyrics and music come together. The lyrics should be represented in the right way in the music. Sometimes the lyrics get their voice by means of the music. The emotion and ‚what should be told‘ become one entity.

– Could you tell us something about the production process of ‚tbc‘? How long did it take, where did it happen, what were the difficulties, how did you prepare for it? What was the best, what the worst moment? Most told anecdote?
As I said, we played them live for a long time and then decided that we wanted to gather this set of songs on an album. We recorded them at a small former radio studio (‘Track’ in Kortrijk), where we were band in residence at the end of 2010. We just hired an engineer and recorded the songs, mainly how we played them on stage, and we added some extra parts and arrangements. Then we decided to hire a mixing engineer. That was quite a difficult part: how do you choose the right one? Finally we looked up the engineers of albums we liked and we were pretty fond of the sound of the recent Efterklang albums. We decided that we would go for Darren Allison, who did one of the Efterklang albums and also worked for The Divine Comedy, Belle and Sebastian, etc. It was a bet but a good one. After a couple of  mails and phone calls we took the train to London and we jumped off the metro somewhere in North London. It was both a frightening and exciting moment when we were greeted by a guy with blue/black-dyed hair and a jeans jacket: ‘Ha, here are the Belgians!” 🙂

– For ‚tbc‘ you did work with Darren Allison – how did it come to this and which influence did he have to the sound of the record? How does he work?
Darren appeared to be a terrific guy. He worked with an eternal devotion, from early in the morning until late in the evening in his little home studio, where we even couldn’t fit in with 3 people 🙂 He was very focused and would forget to eat if his wife didn’t pay attention 🙂 He added a lot of analog elements to the mixing process, working with tape recorders and stuff like that. We were very happy with te result.

– We read you’ve just signed a record deal with Crammed Discs – how did it come to this and why did you decide to sign with them?
Although we have a DIY approach and like to have lots of control over what we do, artistically and businesswise, we had the ambition to release our music internationally (our original release was only Benelux). We understood that we needed a good partner. It is a big advantage that Crammed is a small company which acts really from love for music, but still has an international reputation. Of course, it’s business, but you feel that the people are really into your music and not just marketing guys who work for a big salary. We don’t know them that long, but we really feel at ease with them.

– There is a new international release of ‚tbc‘ & ‚Same Stars We Shared‘ planned – can you already tell how this will look like and if there are already plans for new releases as it has been nearly two years since the
release of ‚tbc‘?
It’s almost the same digipack as the original ‘tbc’ cd and the ep ‘Same Stars We Shared’ (our first release in Benelux) is added as a bonus insert. It looks very nice!

We don’t have concrete plans for a next album, but we are working on many interesting projects. We’re doing two promising soundtracks projects at the moment and we’ll start on a multimedia and internet project called ‘Deleting Borders’ soon.

– We also read that you were busy working on the soundtrack of a dutch movie – how are you involved in this project and is the work on a soundtrack different from your normal workflow?
It’s the Dutch movie ‘In Your Name’. They asked us because they like the atmosphere of our music and thought that it would fit in the ambiance of the movie.

It’s a very interesting working progress because we can experiment with ideas and sounds, without the pressure of creating full-fledged songs, we just need to create a certain ambiance. It’s a really enjoyable creativity sandbox which will definitively have an influence on our future album and live work.

– What are your next plans?
This is an important year. Much will depend on the international success of this release. We hope to play a lot in all these countries. At the same time we are working on the soundtracks and on the internet multimedia project ‘Deleting Borders’.

– What are you doing if your not making music?
Music is the biggest part of our life now.

The last couple of years I also got interested in the new music business and how internet technology changed that. I got interested in actually writing software, and how it can inspire you to create new experiences, even as an artist. The Deleting Borders project is for a big part inspired by that idea. And I’m also interested in the business part. Actually we don’t have an artist manager yet. We handle these things ourselves.

– Your Top 3 records of 2012? Why?
Alt-J: goods songs, original sound
Bobby Womack – The Bravest Man In The Universe: I just love what Damon
Albarn did to motivate Womack to make such a beautiful record with him.

– Which song makes you dance independent of your situation?
‚You Can Call Me Al‘ by Paul Simon, it’s just a briljant song and record and the African rhythms always do the trick!

– How would your „Bedroomdisco“ look like?
Sebastiaan: When I was a kid i had a discoball in my bedroom and at night i’d turn it on and blast my bedroom speakers!

– Who did fill out this questionnaire?
Hilke. Sebatiaan also answered some. 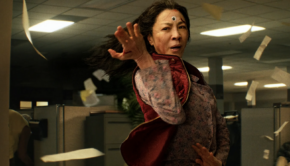 EVERYTHING EVERYWHERE ALL AT ONCE – Filmkritik → 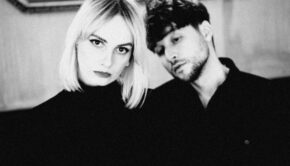 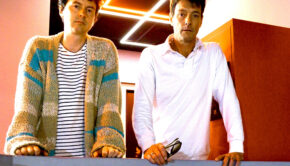 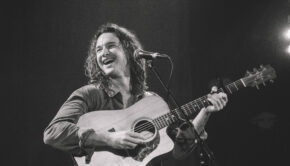