When I first heard „Heads Up“ I thought wow this is very poppy and funky, was this kind of a plan to change your sound in that way?

Well, I think we always have some pretty strong grooves on our albums, but yeah we want to make it dancier. I think in general it’s a little more accessible, it’s just the art of finding the right groove and hooks to go over that, and yeah we found that. There is this kind of concept because we really enjoy playing those songs, that kind of music and dancing on stage and having the audience dancing. That’s the most satisfying part of playing life.

Heads Up – is it like a optimistic message? In which Ways?
Yeah, „Heads Up“ is a title of one of the tracks on the album and this song is definitely about keeping your head up when things are tough. When life is giving you lemons, make lemonade and keep your head up!

Which references will we find in the lyrics? Are there any political or autobiographical ones?

Well in general we always written songs about our experiences as individuals, trying to make our way in the world like everyone else: Being who you are, expressing yourself, feeling ok to do that, loving yourself, loving other people and all of that stuff. It is really political when you think about it, because at the base of all the huge issue are these personal issues. But there is no political message like „free the slaves“ or „dump trump“.

With only four month of being in studio,  heads up was like the “fastest” of your albums. How did this come?

We spend about two month recording but this was just like finishing those songs. We spent time last year making them, starting them in different times. So it wasn’t just two month, we work sitting in a room together writing those songs and arranging them together which does take longer sometimes.

What does a typical warpaint-songwriting-process look like? And how do you transfer that to your live-peformance?

We usually playing live together and jaming, then we record our jams and listen back, turn them into songs. And then we playing them some more and arrange them. But this time, we did it sort of different, this whole album we did track by track. Like for instance „So Good“: I went to Stella’s house and I had an idea what I wanted the song to be, put down a bassline and wrote the song. Later we took it to the studio and finished it. And now I have to relearn the guitar parts I put down, because I haven’t replay them for months. I am very excited to play the album live, more excited than play the last ones because it’s totally new to me!

How has your work with Warpaint changed after you two have been focussing on your solo albums for a while?

It’s really nice to come to the band and collaborating. There has been this warpaint project and it means everything to me. But at the same time warpaint is all four of us, so it has to be a strong voice from all of us and I still do feel like sometimes I have to stand up for having my voice heard. We don’t have one leader and that’s the point of the band. So it’s important for us to go out and do things, where we are the leaders if we want to. It’s a brilliant exercise! I mean I learn so much about what kind of music I like to make and how to write a song and I just feel like more experienced, too.

How have the group dynamics within your band developed over the years?

I think we kind of almost split up after the last album. Just because we were on tour and we tried to put all of our touring into a shorter amount of time. So we did to much in one year, I think. By the end we were really tired and we just needed a break from each other. It’s difficult because we do need all to be heard and feeling important in the band. There is a little bit of power-struggle and that’s actually quiet natural for bands. The group-dynamic has sometimes to deal with the power-struggle but it’s like in any relationship. We are like in a marriage, a four-way marriage and we have been together for a long time and we found out that we love making music together, still love it but we have to be careful and respect each other and make sure that we do things that makes us fulfill like solo-projects and stuff and then everything will be fine.

Is there a certain musical influence you can think of when describing the music with Warpaint?

For me it’s all over the place. I don’t think there is one angle, that’s so great about us. We don’t know what we get, it can be anything. That’s something unique, I think.

You seem to be very aware of your visual presence, especially your album covers…please tell me something about the new one…

Well, it’s a picture of us in a space downtown, where we recorded the album: And it’s us 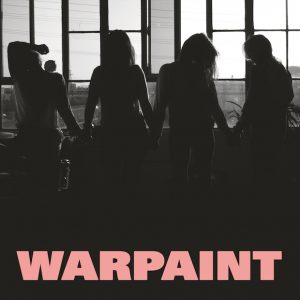 together. We almost called our album “By Your Side”, because that was kind of a perfect sentiment. It’s like us looking out into the world from our space. I think that’s the message of „heads-up“: looking out and being less introverted maybe.

I was wondering whether, although you’ve been in the indie music business for a while now, you still have to deal with sexism a lot? Because I feel like in the music industry women have to work twice as hard at time to get to where they want…

Do you think so? Maybe it’s a german thing… honestly it’s not my experience, I think there are many women which doesn’t put themselves in a other position than being a lead-singer. But I think the doors are wide open for women to take other positions. It’s just a matter of woman taking it. Do you wanna be an engineer? Do you wanna produce music? We should expand our horizons. 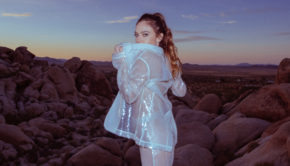 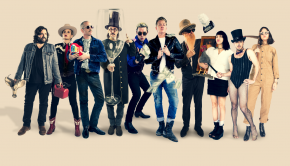 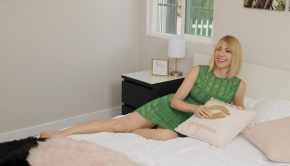