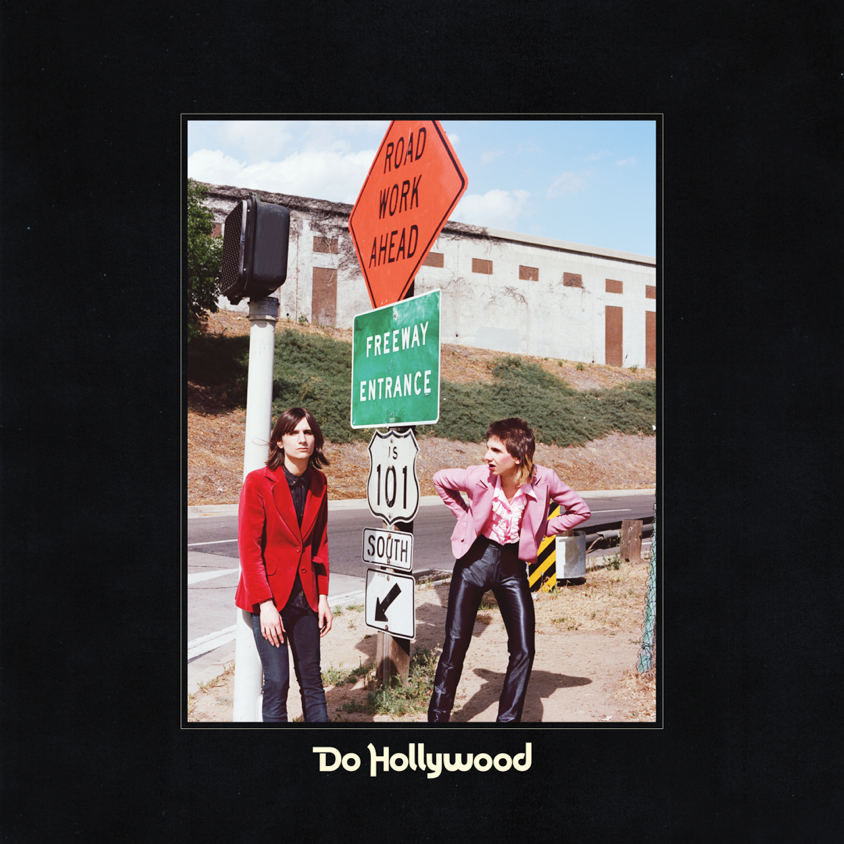 Since you’re quite young, it must be easy to remember: How did you get in to music?
MICHAEL: Well, my dad is a musician and my mom is a singer, so my dad taught us how to play a lot of instruments and we’ve been exposed to music and stuff…we don’t remember any instances.
BRIAN: Yeah, we have vague memories of just being obsessed with The Beatles basically. It’s just something that’s always been part of our lives.

So what kind of music do your parents do?
MICHAEL: My dad did pretty much like Beatle-Pop – Bad Finger and Big Star – you know, power-pop and Beatlish bands…
BRIAN: And he would do loads of harmony stuff of just him singing. He would usually record all the instruments. And our mom was kind of a writer…
MICHAEL: She is from Ohio, but near Kentucky, so she listened to a lot of country.
BRIAN: And they were both into Broadway music!

When listening to your music, some influences seem quite obvious and you also talk about The Beatles and Beach Boys being important. Which other bands would you name?
BRIAN: Well, those are like the main and basic influences we grew up with as youngsters.
MICHAEL: So it’s like – naturally, when we write a song it kind of sounds like that. But in terms of sprinkling a little bit of coolness and constantly trying to sound like people, I also like Tom Petty and kind of more straight-forward stuff… I always want to sound like that, but I end up going into these directions like the Beach Boys or The Beatles. But I always want to sound like Tom Petty, Big Star, Alex Chilton…
BRIAN: And my goal is trying to incorporate classical stuff into the pop music. Because I feel like The Beatles and the Beach Boys at their best are really just beyond doing pop music – they’re trying to create melodies that are just great on their own, no matter if you’re doing it with a guitar or if you’re doing it with a trumpet or something. And that is like the whole point of classical music: You always have all the symphonic instruments, like a violin or cello, and you’re just doing everything you can with just notes. So I try to apply that to a rock setting so that it’s not so reliant on style, I guess.

And what would you say distinguishes your music from the bands you’ve named before?
MICHAEL: I think a lot of the time now people can’t see past stylistically being like a band. But back in the day or whatever a band could be like the Electric Light Orchestra or be obsessed with The Beatles and sound a lot like The Beatles – or the Beach Boys sounded a whole lot like the Four Freshmen…and people can sound so much like other bands – but they just write new songs! And they write songs that don’t steal the melodies, the guitar parts – they are just naturally influenced by these people. And that’s just what it used to be like and people wouldn’t write reviews about these bands and then say “they sounded like the Rolling Stones and that makes them not their own band”. Before, people could sound like the Rolling Stones generally and still write new songs. So we write these songs, and you can say they sound like them, but you can look in the catalogs of these bands, but you really won’t find these songs. So that’s as much as we have to offer.

So maybe people compare a lot more because of the distance of time that’s between these bands and your music…
MICHAEL: Yeah, because you wouldn’t compare Katy Perry to…well, I don’t know who sounds like each other! But let’s just say you wouldn’t compare – they sound the same – so we don’t talk about it.
BRIAN: And I would really like our review to read like really zeroing in on the songs itself without having to resort to “this song has a Beach Boys bridge…” It would be cool – hypothetically.
MICHAEL: I don’t know what’s interesting about somebody analyzing my song anyway. I would read somebody else’s analysis on a Beach Boys song maybe, but for me – when someone wants to analyze my song, they can. But I don’t want to read that – I know what my song is about.

About your songwriting: Are you both equal members? Regarding to who has to “rule”?
BRIAN: Well, if we’re doing a song that started with me, I “rule”.
MICHAEL: …but if we’re doing a song that started with me, then I “rule”. That’s the deal.
BRIAN: And the record is sequenced to make it easy for people, so Michael’s and my songs are always alternating. Because when we recorded it we were really obsessed with the fact that it’s two separate songwriters and we wanted to get that clear, you know.
MICHAEL: And we hope that people will actually be devoted listeners and care enough. Like that they would notice if we switched leads in the middle of a song. And we did just make an album that doesn’t have any theme, meaning there’s no connecting theme with all these songs. They are just songs about our own lives for most parts.

So how does that relate to the album title ‚Do Hollywood‘?
BRIAN: Well, before we recorded the record we had the idea of going to California to record a record. And that was like, you know…glamorous… It was all about California and Hollywood…
MICHAEL: But California is not Hollywood! So when we went there, we recorded in this place called “The Valley”, which is just suburbs, so when we named the album, we thought it was kind of a funny name – because it is quite ironic.
BRIAN: And the back of the album is a picture of a dumpster that was around Hollywood Boulevard. So that’s what it really kind of was like, I guess.

I read that you both play all instruments. So how does that work on stage?
MICHAEL: Yeah, halfway through the set we rotate on stage and then I play guitar and he plays drums. And we also have a bass player and keyboard player on tour, but on the record we played all instruments.

How was recording with Jonathan Rado from Foxygen? How did that happen?
BRIAN: I contacted him through the…internet! So I sent him some music and he said “this is great, Facebook me” and then I hit him on Facebook and we changed numbers. Then a friendship developed which would change the course of music industry forever! (laughs) Well, anyway – we hang out and we recorded our record together at his house.  That week when I contacted him I was kind of sick, because I had contacted a bunch of labels that didn’t respond to me. And we had never tried something like that, you know – reaching out to the people we like. And we were big Foxygen fans. So I didn’t really expect him to listen to it or respond…we were really happy.

So how important are the looks?
BRIAN: More important for him than it is for me!
MICHAEL: (laughs) It’s true!
BRIAN: I usually take the clothes that he decides aren’t cool enough anymore…
MICHAEL: Yeah, that was my shirt! These were my shoes! Those were my pants! I have to admit, I sort of secretly replace his stuff with my old stuff, because he doesn’t really care that much. So I kind of like toss his old shirts and slip my old ones in there… (laughs)
BRIAN: I got to admit though, I kind of like looking cool now. It’s fun! I feel like I look kind of cool!
MICHAEL: Aha. Everyone likes that, people just don’t like the effort! So I do that for him.

So before we finish – can you name three things that you would choose to describe The Lemon Twigs?
MICHAEL: Writing songs that are original, but still are pretty and people can understand them.
BRIAN: I’ll do a second one! Making sure that our music is emotional and never be kind of false; it shouldn’t reflect things that we don’t think. It should just reflect things that we actually believe or reflect something that we’re interested in.
MICHAEL: And it should all be in this perfect package – you know, sound really good and look really good.

Okay, thank you a lot!

The Lemon Twigs |
These Words