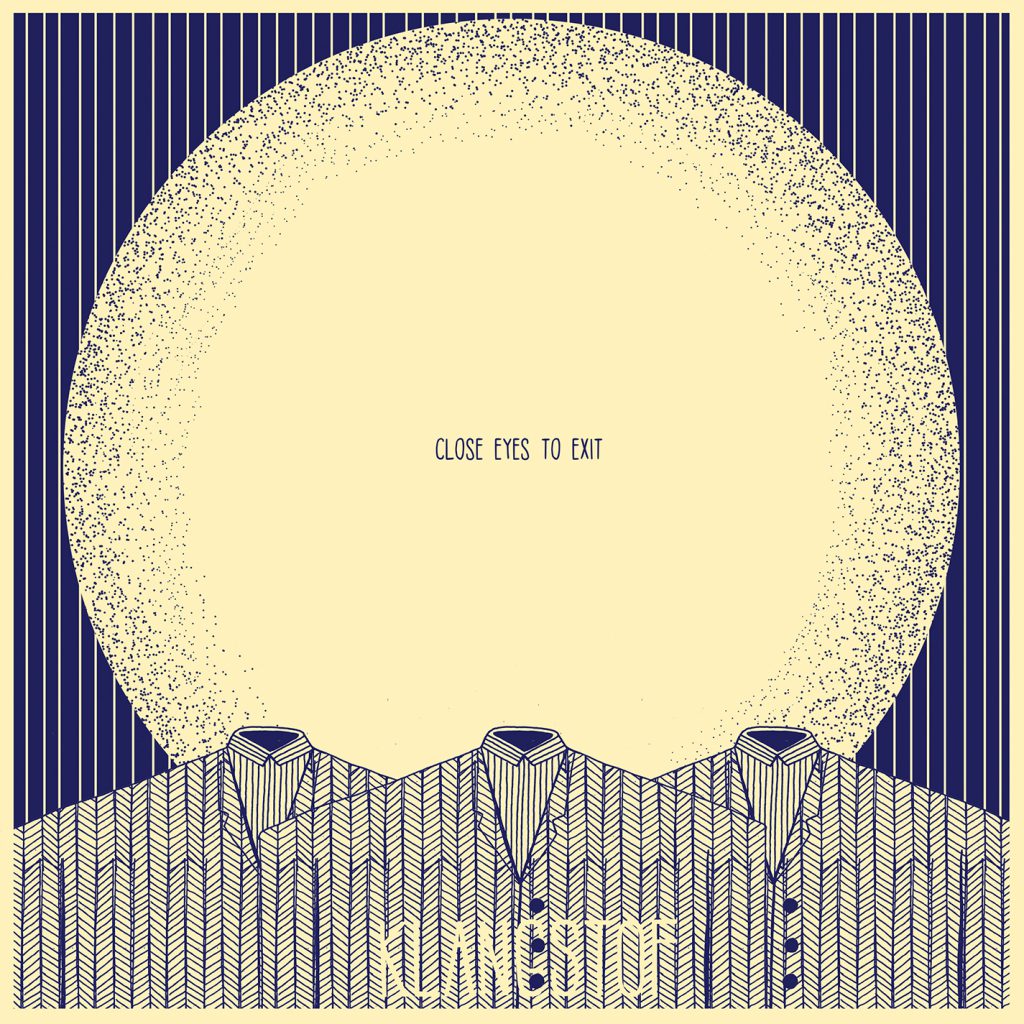 So you’re on tour at the moment, how’s that going so far?
K. It’s going great, it’s a bit of a lazy tour though, we only have a handful of shows really. We’re having the rest of January off I think.
J: We’re kind of doing the never-ending tour, a couple of shows here and there.
K: It’s nice. We had a month of shows in the US so like 17 at once which was a bit full on. So it’s nice to have them spread out a bit more.

Are there any particular places your excited to play?
J: Berlin of course. No but for real Berlin is such a cultural city so it’s ganna be cool to come down here.
K: Yeah it’s just the same as the first time in London. It’s such a big influential city that it’s amazing. Coachella is obviously ganna be great too. Wherever people are into it it’s nice to play really.

You said you just did a month over in the US – do you notice a difference in the crowds compared to Europe for example?
K: Yeah very much. Everywhere is always very different to the Dutch who are very chatty and it’s just like we’re background music. Whenever it’s not a Dutch audience you can definitely tell the difference. Which works with our music as we want to play more dynamic and soft which doesn’t work if everyone’s chatting and loud.

Do the Americans not make more ‘whoop’ noises though?
J: Accept for Boston. We played in Boston the night after Trump got elected – it was such a weird night.
K: It was kind of like fuck this country but let’s try and have some fun tonight vibe. We were in Canada on actual election night and then had to drive through the border the next day. Everyone was trying to get through to Canada though of course.

So how did you guys all first meet?
K: When I was 14 I moved to Norway and I met Jobo 3 years later. I was kind of making music and demos and then we decided to form a band together called Stereo Bullet. And five years later I’m back to Holland to play with another band and I kind of left Jobo alone in Norway. Next to the band I was in I just started writing and recording my own stuff too, just me having some fun. But I posted one song and then a label wanted to sign me so I just went back to my old friends and said don’t you want to come back to Amsterdam and start playing in my band. And I think he pretty much took the first flight over.
J: Yeah just packed a few essentials and went straight over.

You recently released your album, Close Eyes to Exit. How’s the response been so far?
K: Amazing. Better than I expected mainly because, for a Dutch band you just don’t expect anything to happen outside of Holland. To be able to do one month in the US was just amazing. It’s kind of growing very slowly.
J: It’s different to our very first gig in Italy where there were like five or six people in the audience. And now we have shows all over.
K: It’s still very underground but at the same time we’ve started selling out venues, which is great.

Why do you choose to write your songs in English and not Dutch?
K: I know very few artists who can sing well in Dutch cause it’s so hard to write proper lyrics you know. The language just sounds so ugly.
J: I think Dutch and German are the two languages that are just not nice.
K: I would love to sing in French or something but my English is just a lot better than my French. But yeah I just can’t see it, writing in Dutch.
J: A lot of people ask that question. But I mean we live in a global society where the main language is English so everything happens in English. I’m from Norway but I don’t watch any Norwegian stand ups, everything’s American. So I think its just natural…
K: It’s also the only way to succeed. Sometimes it’s hard; I do struggle with lyrics because I have a smaller vocabulary. I do find writing lyrics the worst part of the music for that reason, they’re just there to bring it together really.

So you think the music is more important than the lyrics when composing a song?
K: Yeah in my case it’s definitely 90% music and only like 10% lyrics. It’s just a nice layer on top of it but it’s not the main aspect.

How did your song writing process work in the band?
K: I kind of wrote the whole thing on my own and recorded it as well. They were still in Norway so I was basically writing the record without anyone else. And I think I showed it to Jobo to see what he thought cause I knew he’d be honest with me. So he’s been giving me a pretty hard time during the writing process saying stuff like change that do this. But I did want to do most of the writing by myself, I felt more comfortable that way. It’s like if a painter is painting and then someone else tries to paint over it, it doesn’t work. But for the second record I’d love to write with the band, see what that’s like.

Was it strange when the band joined you then?
K: Yeah but good cause it was like we shouldn’t just copy the record lets do something more with it. So we started experimenting a lot with synths and making it a bit louder, that kind of thing. Which worked out really well I think.
J: Yeah when I see bands live I don’t want to get a replica of the record. It’s like I’ve listened to the record at home, I want something new and different. We definitely bounce off each other more on stage and just have fun more than anything.
K: Yeah it’s a very natural thing. So for example if the drummer is a bit sad then he probably wont hit the drums as hard so we probably won’t play as loud. And Jobo has this Swedish nicotine and sometimes he goes on stage and has 8 of them on so he’ll play more slow cause he’s just in this really chilled vibe you know. So now we have to play the whole thing half time, which is fun!

If you had to choose recording or live which one would you pick?
K: I think I’d give sitting in the studio a 10 out of 10 and maybe playing live a 9 out of 10. But it’s hard to choose because they’re so different.
J: Me I’m definitely more of a live person, any day.
K: I think I’d get stuck if we just did live all the time. I like my space to go away so I can write so I kind of need that studio outlet. I find it really difficult to write on the road too, mainly because I use loads of synths which I cant use on the road cause I can’t take them with me on tour.

Do you have any good tour stories?
K: I think we’re really boring. We just sit on the bus, read some books, play some Playstation. We did have an xBox but we broke it quite quickly.

If you were on a desert island and had to pick three albums to take with you, what would they be?
K: I always wonder if I wanted to take happy or sad songs. I think probably a mix though. I guess we could also do a best of album. Best of 80s or something.
J: Best of 70s, best of 80s, best of 90s…
K: Just various artists best of 80s!

Do you think being in a boy band, image is something that you think a lot about?
K: I don’t like the term boy band.
J: I love it! I’ve thought about this actually, when a rock and roll band consists of all girls we call it a girl band but when a rock and roll band consists of boys it’s just a band. And why is that? I would love to call ourselves a boy band.
K: I like that actually.
J: Dude, I actually have that in my tinder bio – in a boy band.

But boy bands obviously have this history of image. For example the Beatles all wearing the same thing and having the same hair cut when they first started out. Have you ever done something like that or considered it?
K: We had a moment when we first started out where we were all styled and our label tried to get us into more wearing the same things. And we did that for about 3 weeks and was just like no we need to be ourselves. Which is really important I think. We have some restrictions, like our synth player has this t-shirt which says ‘smoke weed’ which is definitely a no no.

So image isn’t something you worry about?
J: It’s important to think about, its part of a band’s repertoire. Like also album art work as well.
K: Yeah but it just shouldn’t be over the top. Like Coldplay for an example whenever they have a new album they have t-shirts with the album painted on it which I think is just a bit over the top.

Do you think you feel in control of your image as a band then?
K: The US force from the label side is very strong and they can pull a lot of strings. So at first we were taken a bit back and like oh wow they’re turning us into something we don’t want to be but then we just took back that control. And now we’re being ourselves again.

Where can you see Klangstof heading in the future?
K: Its ganna be amazing, a lot of playing. And maybe release some songs again. I’d give it a 9 out of 10 you know. Definitely keep writing and starting together.
J: Working towards the new album is definitely the main aim.
K: Now we have our own studio in Amsterdam which will make it a lot easier to just get together and play. It’s way more fun! 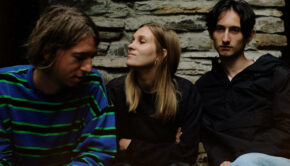 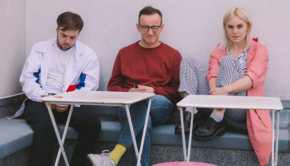 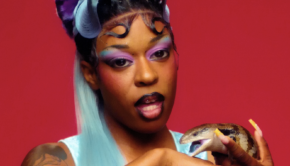