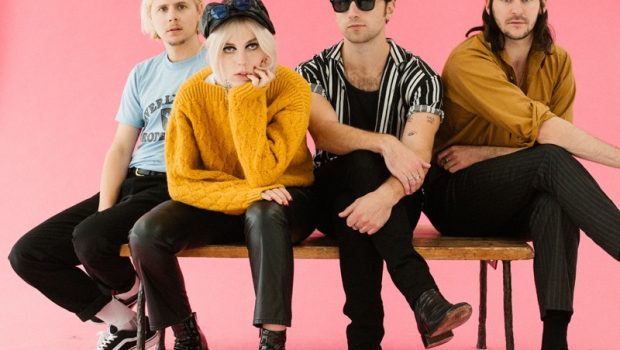 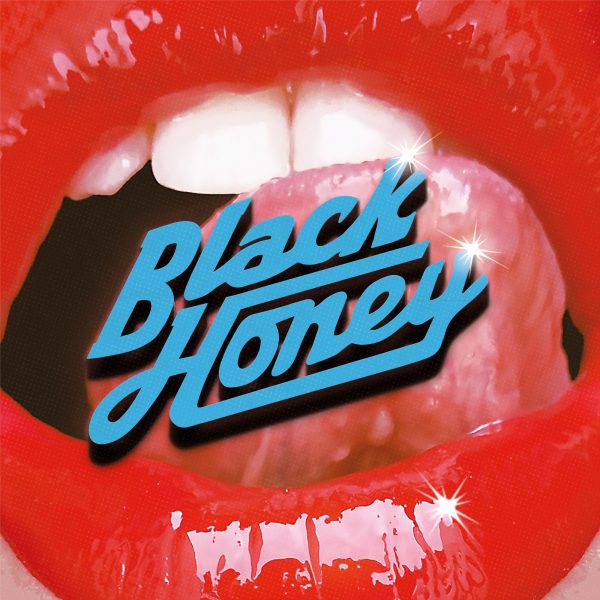 – We know you’ve been around for some time and probably hate this question to your guts – but as your debut was just released and a lot of people will now be newly introduced to you: How have you met, when did you start to do music together and how did you start of as a band?
We are Black Honey, we are kinda like Blondie if they were In a Tarantino movie. We met in Brighton, through friends of friends and different bands. We made Black Honey cause we craved something different from the conventional rock bands around.

– You also had some other band names when starting off – why did you then decide to change it to Black Honey and for which reasons did you then stay with it?
We played as a few bands, but the sound never really worked until we made Black Honey and started using tremolo and vintage reverb on my voice. I guess it just connected…

– How would you describe your music style, which musical influences / heroes do you have?
We love movies, particularly Tarantino, Wes Anderson and David Lynch. I like to create music that transports you into something more cinematic. All my lyrics are honest I have quite an open journal ethos to writing.

– In an interview with DIY you mentioned your creative genetic parents would be Andy Warhol, Kurt Cobain, Blondie and The Milky Bar Kid – what do you like about them and which parts of their creative work would you like to adapt?
I love them all for different reasons, Warhol is my idol as a creative it’s hard to make anything in pop culture that in some ways doesn’t reference him. Kurt was the first musical artist I felt a sincere and personal connection with through music. Blondie is the outline of Black Honey and who we are and I feel like I am the milky bar kid in my heart as a fictitious childlike character with blonde hair.

– We also read that you’re influenced by / writing music while watching Wes Anderson movies – how does this work, what do you like about his movies and could you name an example of an influence from that working routine?
I was working full time in a vintage shop and rehearsing 3 nights a week in Brighton so my down time would involve sitting in my boyfriends bed playing guitar with movies on in the background I love the blocks of colour the most. I want to make blocks of musical colour like Wes, full of character and weirdness.

– Also besides Wes Anderson you seem to be heavily in love with film makers and their works, from David Lynch to Quentin Tarantino – what do you love about film and why do they stand out for you? Which movie did you fell in love with last?
My current favourite is Wild At Heart. I think it might just be my all time favourite David Lynch piece only just over taking Twin Peaks. I have a snakeskin jacket that I wear on stage when I want to feel like sailor and dance with karate moves.

– But back to the music – the industry is changing a lot, with streaming services getting more and more power, while the physical market and even music journalism get’s less and less important. You seem to have a strong opinion on how the label system works (or in the end doesn’t work out most of the time). Could you describe a bit how your feeling of the music industry is as a band, how you feel about the actual time and as a band being in the middle of it, plus which decisions resulted through your idea of how to deal with the situation?
I just feel like it’s fucked for artists. The label gets payed by Spotify who gets payed by the advertisers and listeners. Who pays the artist? I could sit here all day moaning about it though or I could go and write a song. I never knew the 90s I will never know a paycheck like that. But I don’t do it for money I just love writing music and am lucky to have this opportunity.

– You also released four EPs before your debut came out and took a long time from the start of the band to the release, which seems unusual, as most of the bands want to crush the debut right away to be able to start touring headline shows. Why did you decide to go this way and how do you feel about it, looking backward?
Looking back I loved it! No regrets… fuck what everyone else does we have always walked our own path and I think we made a better record for it.

– Could you tell us a bit about the production process of the record? When, how, with who was the record done, which was the best, which the worst moment of the time and which is the most told anecdote of it?
We started it in a studio in north London, and recorded it in evenings around rehearsals, shoots and tours across a few months. I loved working like that, I don’t like the idea of being locked into overthinking production. Space is important for me as an artist. The best moment was the last few pieces of the puzzle slotting into place! It was rewarding and eye opening and felt so good in my heart. The worst was overworking myself to the point of exhaustion where I was throwing up after 5 days of 19 hour days before starting the tour. The anecdote of the record was the time we recorded percussion in the big north London studio where each band member would “play the broom” or “hit the step ladder” all with no click and at the same time…It felt like a really weird self therapy lesson! Then Mike from Royal Blood comes down to record piano with us and we have to all act like real musicians again!

– For the record you worked with producer Emre Ramazanoglu, who is best known for his work in hip hop, so probably not the obvious choice for a rock band. Why did you decide to work with him, how did you come in contact with him and how did he influence the record?
I loved emre because of his drum sounds. He was just so inspiring in a refreshing beat way.

– You’re located in Brighton, a very iconic city, which we only know through photos, films and stories…how would you describe the place and what is the music scene there like?
It’s a multi-coloured-left-thinking-green-climate-supporting creative city with more pubs than people.

– Do you still buy records and what was the last one you brought / listened too?
I last bought a weird compilation called Hillbilly’s from Hell Volume 4 I absolutely love it Dolly Parton features and I’ll be excited to get the other 3 volumes.

– What are your next plans?
We hit the road for a full headline tour across the UK and Europe. You can expect to see us in Berlin in the 6th of November and Cologne on the 8th! Tickets are available now!

– What did you learn in 2018?
I learned to be truly proud of what we have done and to keep working hard.

– How would your Bedroomdisco look like?
It would be Palm Springs pink satin with vintage cocktail glasses and tequila and Records spinning with Elvis dancing. Cherries and candles.