– How did you come up with your band name?
It is a title of a philosophy book. I just liked the image it conjured up of a dark,
brooding sea. A place where you don’t quite know what lies underneath the surface.
– How did you become a band?
Trial and error.
It started out as a project of me and my best friend. He didn’t like the idea of touring
constantly and we each wanted to go a different musical direction. Since I wrote all the
music, we parted ways amicably and remained best friends.
After that, the band had various line-ups for almost 2 years up until right after the
recording of „Reverence for Fallen Trees“. Kim Janssen joined a few months before the
recording of that record and co-wrote some of the music. After the recording, my wife
(Megan) and my old college buddy (Stef) joined the band one after the other through
the course of time.
– How would you describe your style of music?
Acoustic, folk-influenced, pop music.
– Which musical influences did you have when producing your album?
Bon Iver, Fleet Foxes, Bonnie „Prince“ Billie, Arvo Pärt, Benoît Pioulard, Hatebreed
– Your album´s title “Reverence For Fallen Trees” conveys an appreciation
for nature, what´s the idea/story behind that name?
The title has a double meaning.
First, and foremost, it is a metaphor for the old saying „Honour, the dead.“ In my
specific case; 3 of my 4 grandparents passed away in the year before and during the
time that the recordings took place. I experienced my grandparents‘ presence in my life
in a gentle and unobtrusive way. The way trees are present when you walk down the
street and you don’t really see them. Until one day, you walk down that street and all
the trees are cut down. There is no longer that protective presence hanging over you.
You are all of a sudden exposed. So, the „Trees“ in the title are a natural metaphore for
„My grandparents“. I respect my grandparents a lot. This is a way of me giving my final
salute to them.
The second meaning comes from the fact that we recorded most of the record in a log
cabin (house) in the Adirondack Mountains of upstate New York. That region is the
oldest and by far largest natural preserves of the United States. The Adirondacks are
rugged, wild, mountainous woodlands with a few small towns. It is a very inspiring,
unconquered territory. It is also a very unforgiving; an area that , as a fragile human
being, demands respect. From this stems the a more literal meaning of the title
– Which main topics are you dealing with in your texts?Why?
The main topics are: Family, Love, Death. The explanation for that is mostly above
already. The death of my grandparents and the profound effect it had on my parents
and relatives are topics that were close to me. Things that I struggled with. Situations
that I dealt with through music. I tried to give them meaning through music. I also dealt
with the problem of ‚meaning‘ itself. What is meaningful? What is love? Why do we feel
that life is meaningful? etc.
– Your album can be downloaded for free, why did you decide for that way of
promoting your album? Does it work out well, probably better?
A big part of the recording process (in NY) was done for an international recording
project, based out of Utrecht (the Netherlands) , called ‚In A Cabin With‘ (IACW). They
are 50% government funded. They release all of the final recordings for free. We liked
the idea of that. Of the music being available to as many people as possible. No,
barriers between us and a potential audience. We then asked our friends label Beep!
Beep! Back up the Truck – who are a netlabel who’s entire music catalog is freely
downloadable – to help us promote our album on their label.
It seems to be working out well. Our goal was to get the music out to as many people
as possible. So far, the record has been downloaded over 50.000 times (for free). I’m
pretty sure that if we had released the record on a small indie label it would not have
been heard by as many people.
Financially, of course, this is not the best (short-term) decision for a band. But, we’re
not looking to cash-in right away or anything. We’re just hoping to reach an audience
that understands our music.
– 3 top albums of 2009? Why?
Bill Callahan „Sometimes I Wish, We Were an Eagle“ ; songs by a great story-teller,
immaculate production, beautiful arrangements, interesting voice
Grizzly Bear „Veckatimest“ ; great songwriting, progressive-experimental chamber-pop
album, beautiful arrangements, amazing musicianship
Volcano Choir „Unmap“ ; interesting experimental loops, folk, with gospel/soul choir
vocals by my favorite singer of the moment, Justin Vernon (Bon Iver)
– Your best personal experience in 2009?
Finding out my wife (bandmember Megan) was pregnant of our first child.
– Your plans for 2010?
Become a father.
Tour a lot (yes, with the baby).
Record a new record.
Set up a small festival for underground and experimental music.
Start a vegetable garden.
Make millions (optional).
– What’s on your rider?
Tricycles
– What do you associate with Bedroomdisco?
The bedroom scene from Napoleon Dynamite
– Who filled out this questionnaire?
The Black Atlantic’s interview robot 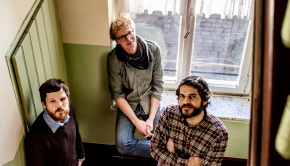 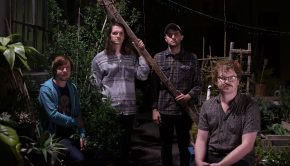 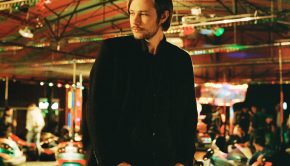