WE WERE PROMISED JETPACKS – Interview

– How did you become a band?
we all met in high school and thought it’d be a fun way to spend afternoons!
– How did the band and the sound change, from when you became a band in 2003?
we’ve got a bit more „mature“ sounding; bigger and more dynamic.
– How did you than come in contact with your label FatCat?
another band on fatcat, frightened rabbit, told them we were alright. they then looked us up and listened to our demo and said they fancied putting records out together…
– How would you describe your musical style?
alt indie? really not sure, actually, it’s a tough one that.
– Which musical influences do you have?
frightened rabbit, the twilight sad, early biffy clyro, dupec, the national, born ruffians, hot club de paris, the longcut.
– What are you as a band/musician doing at the moment?
we’re sitting in a hostel in liverpool! we just ate pizza and watched the first 20 mins of Jackass Number Two, but the stream slowed down so we’re taking a break.
– Could you tell us a bit how the production of „These Four Walls“ took place and how you prepared yourself for the recording?
the songs we already had from playing live, and they’re very much „live“ songs. instead of tracking it we just played it in a room and recorded it. next time we’re going to do it differently, but it gives the record a nice „raw“ feel.
– One of our favourite songs is „Quite Little Voices“ – could you tell what the song is about, how it was done and how you came up with the lyrics?
we wrote it a few years ago now. we were about 17 or so at the time i guess, and i think it sounds like it. we love that song very much, but i don’t think we could possbly manage to write another one that sounds anyhing like it!
– What stands the album title „These four walls“ for? Does it have a connection to the content in your songs?
we wanted the title to be a lyric from a song. a lot of bands do that but it’s a nice way to make the album feel like more of a „package“. the lyric is about roughly the same things that the lyircs in the whole album are about, so it all ties in nicely!
– Your debut could be found on the internet before the release – what did you think about this?
we were not very happy about it. we wanted to get the album back, have a for a while and personally sit our friends down and play it to them. instead, they were able to download it and listen to it without us, and we were a bit unhappy for a few weeks.
– We read that you are also starting to write new songs – how far are you in this process, what can you tell us about the new songs?
we’re writing two different sets of songs! we’ve got one or two ready for our next album, but only one or two. we’re also planning on doing an ep or something really soon, so we’re writing songs that are a bit different sounding, not quite „album tracks“ and we’ve got a bunch of idea kicking about for that. it’s pretty exciting this part of being in a band. this is where a lot of the fun is…
– Could you tell us a bit about the Scottish music scene?What do you like about it, what do you dislike about it?
there’s two different „scenes“ as i imagine all countries have. there’s one where it’s lads who want to get fucked by women and they reckong the best way to do that is to „get signed“. the other half is people making music because it makes them happy and don’t care about making millions of pounds and do it because they want to do it. no half is more valid than the other half, but i guess scotland has a lot of people who are in the second half.
– The video for „Roll Up Your Sleeves“ is very arty? Do you have a voice in creating a video for your music?
yes and no! we had decided that we wanted something a bit more arty (and less us playing in a room) for our videos, but in terms of the substance, we left that up to the professionals!
– 3 top albums 2009? Why?
merriweather post pavillion by animal collective;
actor by st vincent;
forget the night ahead by the twilight sad.
not really sure why actually, but they are glorious albums!
– What did you learn 2009?
getting records to sound like you want can be difficult, but is worth it.
– Your best personal experience in 2009?
getting to play to many many people in the US. and also the amount of people who came along to see us in germany genuinely was an amazing experience. we couldn’t predict that anyone would show up, never mind the amount who did.
– Your plans for 2010?
touring and writing!
– What?s on your rider?
some strongbow cider, water, some rum, some bread and something to put in the bread. we also added „an item of cultural signifcance from your area“ but we’ve only ever recieved two things – some rock from brighton and a touristy banner thing from london.
– What do you associate with Bedroomdisco?
you mean the site or the phrase? honestly, i don’t read the site often, but that’s mainly as i can’t understand a word of german. the phrase itself i guess means something to do with dancing in a bedroom, but that’s already leading to a sordid and unpleasant arena of speculation…
– Who did fill out this questionnaire?
michael from the band. hello!

Hallo and thanks a lot for answering our questions, Michael! 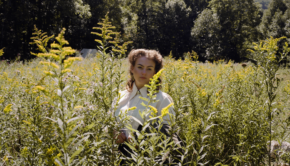