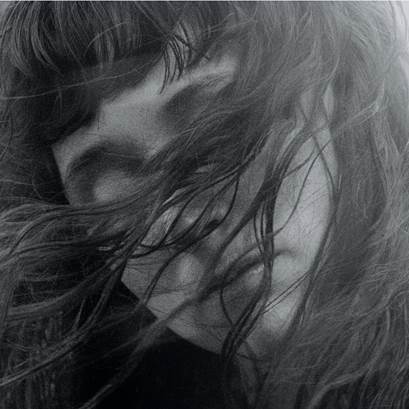 You’ve got a new album coming out in July, Out in the Storm, how are you feeling about it?
I’m feeling really excited about it. This is the first record that I’ve had come out where its reasonably close to when I made it, actually every album I’ve made it’s taken a certain amount of time to know who’s putting it out and when, so by the time you’re playing the songs, you’re almost sick of them. But we’ve never played any of the songs live before and I made the record in December/January so it’s a really quick turn around and will feel exciting and fresh, which is cool.

Where does the title come from?
It’s from the song ‘Silver’. I really wanted the title to come from a lyric because I’d never really done that before. And I always like listening to a record and you hear the title. I was also going through all the lyrics and to me the record is sort of chaotic and this spectrum of emotions at the end of a relationship and I thought that just seemed really suitable – you’re in the middle of it. There’ll be an ending to it, but you’re not quite there yet.

What was the recording process like?
We took like a month to track and then a week to mix. It was cool. In the past I’ve only really recorded at home or someone’s home, never really in the studio. But it was nice, a lot more collaborative. Of course also expensive, doing it at home there were also no time constraints and we could do what we wanted. I knew for this one though I wanted to do something totally different, work in a studio with a producer, and record it with someone who I wasn’t friends with beforehand. And I also wanted it to sound different. So I worked with John Agnello, the producer, and we recorded it in a studio in Philadelphia. John’s made a bunch of records before, loads of huge indie bands, so he was heavily vouched for. And it ended up being such a good process. This is also the first record that I’ve recorded with my live band, so we were fleshing out the songs together and I told them don’t worry about sounding good together just try to write your part and it doesn’t matter if you’re sloppy now, I just want you all to be comfortable. And we get there to record and John’s like, ‘I think you should do it live’. I was just like ‘fuck’, that’s not how we practiced at all. But you know once we got set up and everything, we actually realized we were really well rehearsed so it was okay. I’m really glad we did it that way cause I think it really captures the energy. In the past it’s been difficult to replicate with my live band how it sounds on the record but I don’t think that’ll be a problem on this tour. We did that and a lot of guitar dubs over and did it all in a month. And here we are.

Do you think you’d record in a studio again?
I think I’ll do a lot of other things. It’s funny to predict what the projectry will be. Each record has been different; a little bit bigger, more instrumentation, its difficult to say. But I’d definitely like to strip it back again and I can see myself making a lot of records over the years hopefully. So I think I’ll definitely go back to that at some point.

You write a lot of very personal songs – how do you feel about having that released to the world? It is therapeutic? Scary?
Well I’ve been writing songs like that since I started and using songwriting as a way to process emotions and stuff is one of the main reasons I started doing it. For so long I had no audience and then when I started having an audience it was quite small. So I think the best answer to that is I just got quite used to it, I mean definitely this record I feel like its been a little bit scary because the last record I did, Ivy Trip, the lyrics are more cloaked and abstract. Whereas this is the first record in a long time where I feel like I’ve been really brutally honest and it’s really personal. And a lot of it is biographical and personal so I definitely did have a point where I was like okay this is the biggest audience I’m going to be playing this to. It has been kind of scary but on the other hand I’ve kind of got used to it.

Do you think putting more of yourself in the songs makes the songs better?
Yeah I mean I think that’s definitely why people connect with my music, it is so specific. That’s my approach to writing lyrics anyway, to acutely describe these experiences so people listen to it and connect with it. You know if my lyrics were more vague and generalized, people may not connect with it in the same way.

You tour a lot and have a lot of gigs coming up, what is it about touring that you like so much?
Well sometimes I like it. No I do really love it. I think it’s a momentum thing, its almost harder to slow back down once you’re touring a lot and it’s just a life style you really get used to and sometimes when you go back home you don’t really know what to do with yourself because there’s no structure. Tour is actually really structured; it’s a very specific schedule everyday. And being a musician, your down time and the time you’re creating can be really directionless, you put a lot of effort in, so that structure and pace and the connections you have with all the people that you’re with, it feels like you’re keeping a pace and slowing down is hard. So that’s really the reason I like it.

Do you write on the road?
I don’t as much as some people do. I really try to give myself some slack about it because sometimes I’ll have been on tour for three months and not written a song in three months which is wrong cause you know, I’m a songwriter, but I will write bits and pieces. Melodies, humming into my phone. I kind of have to be in my space on my own, with a guitar and a computer, and you know a coffee and four hours to kill and that opportunity rarely comes up on the road. I’d say I loosely write on the road but I don’t ever finish songs.

Do you notice a difference in the crowds depending on what city or country you play in?
Yes and no. I think it’s more so the time spent off stage that feels different, in conversations, but the crowds, not so much. You know it’s so funny, I was on tour with a band recently and every time they came off stage they’d talk about the crowds and I was like its funny, there’s no real rhyme or reason to it. Sometimes you get a good crowd, sometimes a bad one. To me, I’ve never been able to establish a difference. In some places people are really still and observant, some bands don’t like that, but I don’t mind. As long as people are being respectful of each other and not yelling at each other, that’s fine.

Do you have a favorite place to play?
I actually love playing in London cause we have a really big audience there. I love playing in Berlin and I love visiting Berlin, it’s one of my favorite cities. And then Chicago and LA. Yeah I feel like there’s a lot.

Do you get to explore the places you visit?
It depends on a lot of things if we have days off or long drives the next day or something. Sometimes when we have the time; I’m a morning person so I always try to get up and make a plan but you know lots of the time we’re playing in cities that we have played in as a band 10 or 15 times so you feel like you’ve already seen a lot of it. But if there’s time I usually try to.

You’ve been in Waxahatchee for six years now, how have things changed from when you first started?
It’s done a 180 kind of. When I started it, it was a solo project and I made an album I didn’t think anyone would ever hear and I wrote it in like a week and recorded in a week and it sat on the shelf for a year and then I put it out. So it was such a slow process of even putting that first record out, touring and stuff and it’s just gradually grown. Going from that home produced recorded up to now with a professionally recorded rock record, it’s a complete 180. But I don’t know, I think its been a very natural process, I’m really into taking things slow, I’ve never really been a person who really tries to gun it for being as big as possible. I think that creatively I’ve become more open minded which as you continue to write songs and make music happens quite naturally, you grow and you get better.

Is there anything you’d do differently?
Yeah I guess there probably is. But I mean what’s funny is that my songwriting process is exactly the same, I write songs exactly how I did when I first started writing songs. The environment has to be the same, just me and a guitar. All the demos sound very similar to the ones I first made for the first record. The instrumentation changes and the recording processes, but I think its cool that the writing process has never really strayed, I mean obviously I think I’m better and more confident about it, but the process is still sacred.

Where can you see Waxahatchee going, just continuing to tour?
Yeah you know, an endless process, that’s my life. I’m putting the record out in the summer and I’ll be on tour kind of for the rest of the year. And once that cools off next year I’ll probably start thinking about putting out the next record, but you know that would be insane to think about right now. I’m just ganna be on tour with my band, forever.