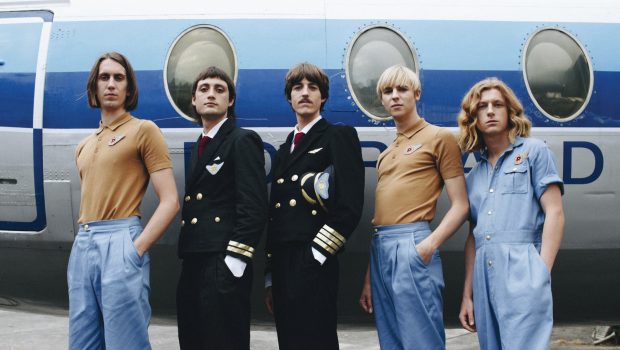 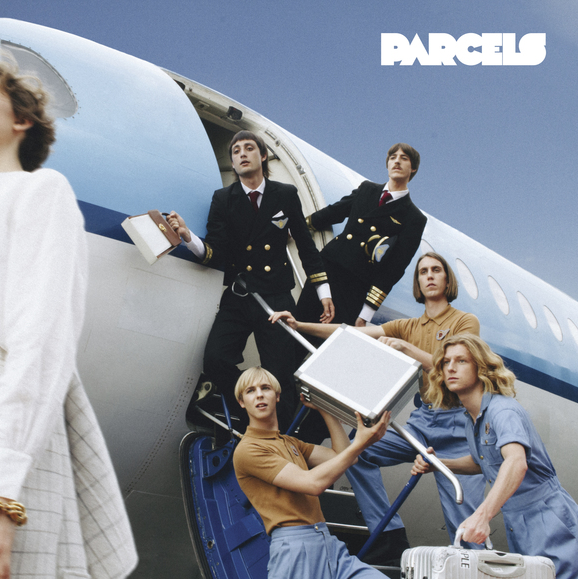 From the moment you start as a band in Byron Bay till now: It’s been a long journey for you guys. How is your new album reflecting that fact?
Jules: It reflects a whole musical career in a way. I feel like the first album is all that into one. We really made sure to get all the influences from everywhere and make something out of it.
Louie: I was thinking the other day: we started with »Comedown« which is like one of the first Parcels Songs. And it ends with »Bemyself« which is the newest sort of flavor we added. So it is really a journey in that way.

After your song »Overnight« – how did you emancipate from the expectation to be the new Daft Punk?
Jules: We try to ignore that. Because of course we are not gonna be the next Daft Punk, they did that already.
Louie: We are five australian boys, not two robots.
Jules: Exactly. We have our own thing to prove. Which they told us to do themselves.

How do you keep the sunshine in your music, while Berlin has one of the hardest winter?
Louie: Berlin has got a great summer as well.
Jules: It has nothing to do with the environment. You just made music for yourself and you write music for yourself, we make music together to play. To play shows.
Louie: And I think we are all vibing something that is usually going into the direction of that sunshiny sound.

I also have to say: it’s a very cheesy question to ask…
Jules: It’s a hard one because that mean that our music is not all that happy. You know it’s a whole combination of things. But it’s nice that people get the vibe out of it. That is cool. I am glad that it is not a depressed vibe.

People describe your sound as mix of psychedelic, soul, disco. How did you come along with the Parcels sound?
Jules: It came along just from jamming. We just like groovy music. High energy kind of dance music, music that make people dance. That is how it came about. There is no thought-process really. When you writing songs I guess they are inspired by this kind of music but we are not actively guiding like: we want a psycedelic-disco-groove.

It’s said about you that you are on a search for meaningful pop music. Do you think you found it already? Or at least a bit of it?
Louie: All the songs get written in the band mean something to us. So it has at least a meaning for us.

What means good pop music for you?
Jules: Oh, that is a hard one. When it comes to good music, it does something to you physically. I really believe when writing a song you kind of has a vision of it. This little place where the song needs to be. It is a emotion you are trying to capture. Sometimes songs hit that spot, right on the mark. For me personally –  it makes me physically feel. It makes me wanna cry and laugh and sing.

Which bands, artists or maybe genres would you name as your biggest influences?
Jules: Biggest influences at the moment is Les Baxter, who was a composer in the 1960s. He is much into exotic music, so I have to mention him.
Louie: And also the first Bob Marley Album »Catch a fire«. There was a time when we imaging ourselves as a reggae band.
Jules: I also put in Neil Young for songwriting purposes. And Fleetwood Mac.
Louie: Definitely Fleetwood Mac. And also „Dark Side of the Moon“, for atmosphere and the album flow.

Why did you choose Berlin to live and to work on your music?
Louie: If everybody who grew up in Berlin would move to Byron Bay they would realise why Berlin is the obvious place to live for us. Because more is happening in Europe. It is exciting, it is cheaper, a lot good things are going on…
Jules: We move for the band and we wanted to start touring.
Louie: There are only 3 venues you can play in Byron Bay. And we have played them all! (lachen)

Do you plan to return to Australia?
Jules: We planned to tour in January. Last tour in Australia we had some crazy fans, it was pretty funny. We played this Brisbon show and it was just insane. It was really weird. Lots of young girls lost their minds.

What are your next plans? Are there any?
Jules: Hell yeah, we are gonna tour for the rest of our lifes. Tickets are on sale now: and here is the ticket-link! (lachen)