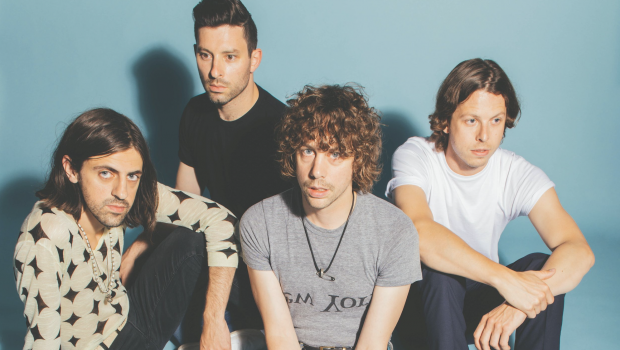 Your new record Olympus Sleeping is the first one after a decade. You have done solo music, but what made you want to revive Razorlight again?
Well, I always knew that I wanted to do it again someday, but I had to refresh myself. We did Razorlight for about eight years. I needed a break from [drums a typical indie rock common time on the table]. Any time I heard that, I just wanted to run away to another world. So, I did. I just knew that I was going to do it again, but only really, when it felt fun to do. But it was really simple. Skully phoned me up, he said: „Come up to London, Dave Ellis is in town, he’s a great guitarist, you guys should play together.“ So, I said: „Okay. I’m going to plug in the guitar and if it feels good, let’s do it. And if it doesn’t, it doesn’t.“ I plugged in the electric guitar and I was thinking that I haven’t played electric for ages. I got my old guitar, which I really love, and it was like: „OK, fine. Alright. This is fun“. And I had a smile on my face. So, I was like: “Yeah, let’s do it!“ It was nice, because I got lots of people that I really respected, who wanted to be involved. I suppose because of the sort of pedigree of Razorlight and I was really pleased. I got to play with Martin Chambers, who is one of my musical heroes. So, that was kind of simple. And I think, I’ll keep doing it until it stops being fun.

So, the next album is already in your mind?
No no no, I’m just enjoying it. I’m writing at the moment, which is really good. And I’m making some nice connections with producers and musicians. That’s really fun for me.

It’s interesting that you say that you tried to do the old thing and it felt fun again, because I thought that your new record really sounds like an ode to old school British indie rock, whereas other bands often try to get rid of that old school indie rock image and sound. Do you think, indie is cool again?
I do. Shit. I don’t know. I don’t know, because I don’t know what’s cool. My ex-girlfriend has some kids, so I’ve got a stepson, he’s 10. He knows what’s cool. And I play him everything.

And does he like Razorlight?
Oh yeah, he likes Razorlight fine, no problem. But I play him things that I think are really cool. And he’s my cheesy meter. I was playing him Wolfpack the other day and I was like: „Hey, what do you think of this?“ He was like: „That’s cheesy.“ And I was like: „It’s so fucking cool.“ He was like: „It’s cheesy.“ It’s funny, because I’ll play him Queen or something like that and every Queen intro is cheesy. But as soon as the drums come in, he’s like: „Yes. That’s cool.“

Maybe he’s going to be a drummer.
Yeah, who knows. I haven’t actually played him this Razorlight album, so maybe I should play it to him and ask him what he thinks. If you’re playing guitar and it’s real and your songs are okay and you got a bit of „it“, then guitar music is always cool. Yeah. It’s funny shit…People. But it should be cool. Playing guitar should be cool. I don’t think synthesizers are really cool, though. I really don’t.

But they have had some sort of a comeback.
I really hated that. I was really disappointed. Well, but I’ve worked with them. I did early demos with Florence and the Machine, I put the band together. I think she was amazing and I still do. The stuff we recorded was very real. But when I heard, which direction she wanted to go – that big pop synthesizer sound – I wasn’t inspired. I was like: „Oh no, now synthesizers are going to be cool and disco…” That time, which is a long time ago now, this whole period was strange for me. I like to see real music and that could be funk, it could be African music, it could be whatever, it could be anything. But that thing of not actually seeing musicians and there’s always a laptop and there’s always this and that… It doesn’t really do it for me. But that’s just me personally.

Talking about retro and comebacks, I thought having a hidden track on the album is really retro, when you consider that most of the music now is probably streamed. But I had the CD and I played it in my car and my friend said: „Oh wait. This is not over, there’s a hidden track!“ and we felt set back in time a little bit. Whose idea was it?
That was mine. I had never done a secret track. I thought, it was about time. That’s one of those little joke songs that I never put out, but I write songs like that every day. So, I was quite pleased to put one on the album. It’s one of those songs, where I can’t tell whether it’s really profound or really stupid. Maybe both.

I would like to talk about another song. Olympus Sleeping – the song the album was called after – what is it about?
There’s somebody who’s about to go to the airport and get on a plane and go home and there’s somebody else, who doesn’t want that person to do that. And they’re talking it through. Or he’s talking it through from his side. It’s like a last phone call on the way to the airport.

In Iceman you sing about less glamorous live gigs like weddings and b’nai mitzvah. Have you actually played this kind of gigs?
The last bar mitzvah I played was my first ever gig. We played my friend’s bar mitzvah in North London, when I was 12 or something. I was playing keyboard in my friend’s band. We were called Oblivion. So that’s the last time, I’ve done a bar mitzvah. And weddings… I don’t think, I’ve ever played a wedding. But I love wedding bands. If they’re good. You don’t hear any shit songs. You only hear good songs. The last wedding I went to, the band was so good. Some of them used to be roadies for The Stones. They were really good players and they came on and they played Superstition by Stevie Wonder straight away, not even warmed up. And it was just so fucking groovy. And I was like: „This is one of the best gigs I’ve ever been to.“ That’s my secret passion. You’ve got my secret: I love good wedding bands. It was actually inspiring. I went home and that’s when I wrote Olympus Sleeping.

So, we’ve talked about small shows, but you have also played massive shows opening for Oasis, The Rolling Stones…
U2, Queen…

Yes. You also headlined big tours, how is your current tour going? Do you enjoy being on the road again?
Yeah. It’s been a very unexpected thing. So far, I’ve had lots and lots of surprises, which has been quite nice. I would like to go for longer.

Yes, it’s pretty short.
We did the UK and then we’re doing this. Maybe we have to put out some more music and see if we can get on tour again.

You should go to a wedding and then write a new album and then make a big tour.
Exactly. Or a bar mitzvah.

In a German article about you I read that Razorlight is the prime example for the debate on how dominant a bandleader should be. What are your feelings about this? How democratic are your band decision processes?
[Laughs] Well, it’s collaborative.

It’s ironic to ask you that, when the other ones can’t say anything.
True. But Razorlight is collaborative. That’s why there’s a difference between a Razorlight record and a Johnny Borell record. But in a way, I’m about 75 percent of Razorlight. But the other 25 percent are really important.

How do I have to imagine the songwriting process? How does it usually work?
It really depends. I think as a songwriter and also as an arranger, it’s very much like trying to direct a film or something like that. You can’t tell people what to do. Well, of course you can. But telling somebody what they should do, doesn’t work. So, you should only work with people that really inspire you. When they do their interpretation and you feel excited and then hopefully that excitement rubs off. And you keep doing that until it’s not there anymore. You have to be quite open. Everybody is driven by different things. You have to work out what drives everybody, so everybody gets the best out of themselves.

The album opens with a vocal sample by Adam Green where Aladdin asks a genie for a Razorlight album that doesn’t totally suck. What do you think: mission accomplished?
Certainly. Yeah, I’d say it doesn’t totally suck. I’ll give it that. I think, Adam said he liked it. I only care about what Adam thinks. I’m down with that.