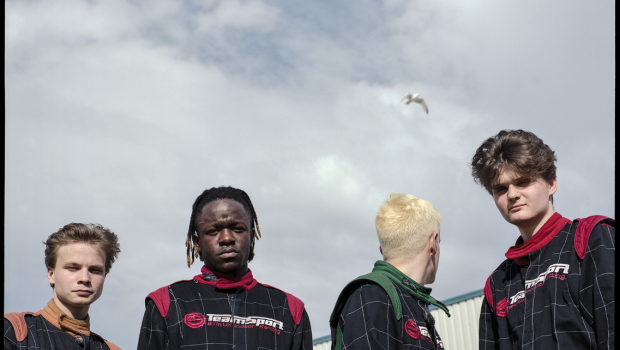 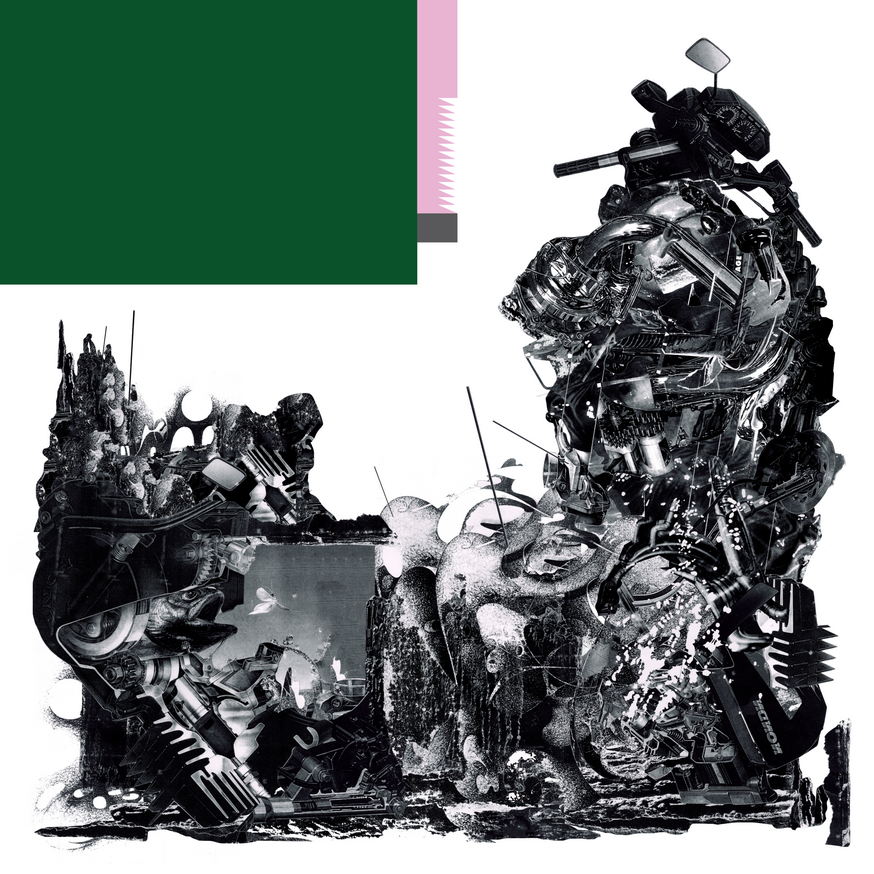 As a German interrogator I‘m obliged to ask you about the title of your record first. Why did you go for Schlagenheim?
There is no link to the country. It‘s just a Germanic word I thought of. I just made it up. Is there a deeper meaning, you might ask? Maybe there is. Astute listeners have to look at it for themselves.

What ideas did you have in mind when you started the band?
When we started out it was just the two of us, me and Matt…(Matt Kelvin concurs with a murmur, like he does most of the time) We got into the music of Swans, Boredoms and Sunn O))), we loved this very long droney thing where after a certain point you get into a state of euphoria. We weren‘t intending do be a band really. We didn‘t want to write songs, we just enjoyed having this feeling. Slowly things evolved, we got Morgan (Simpson) playing the drums and then eventually we started making songs but only after we‘ve extensively explored the feeling you can get from music and emotions. First it was an abstract start, then after dealing with noisy and experimental stuff it was liberating to go in and make songs utilizing bits of that.

You went to the famous BRIT School, known as the place a lot of pop stars like Adele went to.
Yeah, we went there for four years. The school has actually got a lineage of people that you wouldn‘t think of going there who have done interesting stuff, e.g. the producer called Paul White who‘s worked with Danny Brown and has done a lot of cool electronic music. The teachers are really encouraging all kinds of music and push the students in all manner of directions. It‘s never just one thing for them. They are not saying you have to do it this or that way if you want to be successful. The school isn‘t teaching you how to be famous. The course covers all sorts of areas of the music industry and allows the students to pick which one they are most interested in. 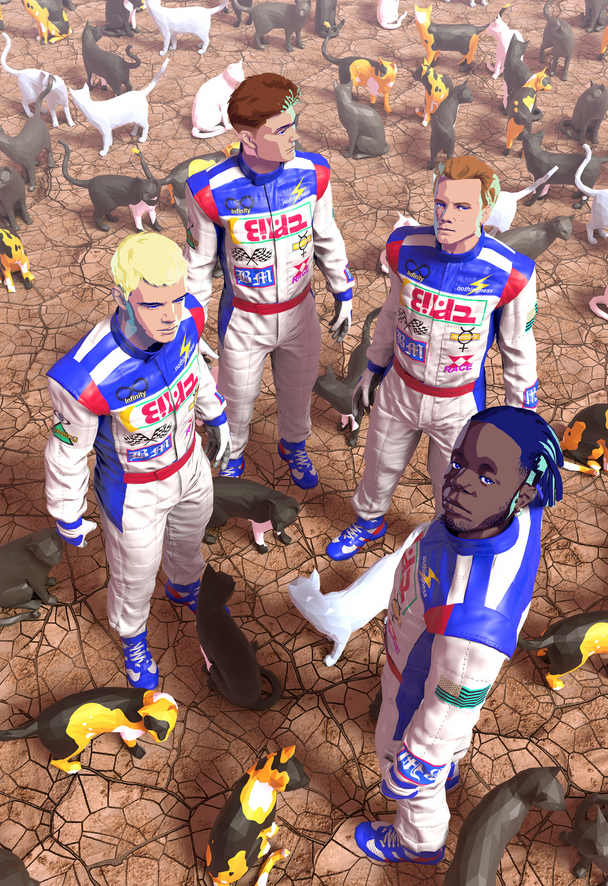 Which one did you pick in the end and why?
The teachers encouraged us to play different kinds of music like soul and funk and world music in courses, it really helped us to develop as musicians. With them helping you it felt okay to make mistakes before you go out and try stuff out publicly. You have got the chance to use rehearsal rooms as well which is quite a commodity in London. You can basically just go there and develop whatever you want for free. Essentially we had a headstart over most bands because we had four years where we could just make mistakes and do whatever and go the the fringes of music for free in these rehearsal rooms. By the time we got out and do our gigs we had a unique thing to work on. A lot of bands need one or two years time in public to find out what they‘re good at. We had a better preparation.

Another element is important for the understanding of your music. A lot has started in church where people apparently have the chance to work on improvised music. How did you discover this avenue for your purposes?
In the UK there‘s a difference between the white and the black churches…well, it sounds a bit blunt when I say it like this but it has to do with traditions. Kids in the gospel church are five years old or younger and they‘re just singing without anyone telling them that it‘s wrong. They‘re just doing it in every week going in singing hymns and stuff, and then just through that practice having it as like a recreational thing they just end up as amazing musicians and singers. They come in every week and play along, it‘s like a big celebration. There are obviously aspects of it that are weird as well. But in general that whole thing is just an amazing way of learning music.

When you‘re saying kids you are talking about the time before you‘ve joined the BRIT School?
Yes, the way I got into it was through a friend of my school before the BRIT school, he played in a church. I did it for quite a while too. It‘s one of the most beneficial things I‘ve ever had as a musician. Often the chord changes are quite strange. It‘s not mechanical or based on any rules. The vocal is also modern, they use the influence of R&B with weird runs and chords over the top. There is also this improvisation stuff where it‘s like … you just have to play anything, the keyboard player will start playing some nice chords and the whole other band follows the trajectory of the sermon to bring it up to the climax – in the same way as in an Isaac Hayes record where he is telling a story and the whole band is following what‘s he‘s doing.

Sounds quite marvellous. But why do I hear this from a British indie musician for the first time?
This whole aspect in music is so underrepresented and underutilized in British life. Improvisation is not taught in school, at least not in that way. It‘s seen as a mythical thing. People are thinking: Oh, you can only improvise once you‘re a great musician, then you can think of music on the spot. But it‘s not like that at all. One of the most natural things in music is improvisation.

The connection you‘ve made with the church is because of the music, you‘re not religious?
No, but because of the religion and their huge belief and the passion they find a way to make a connection to the very best music and the very best art. You can only get that when everyone is completely on the same level. It‘s easy to be cynical about it but you can tell that everyone is there for the right reason and they‘re all doing it for something other than themselves. They are raising things up. You do get the same thing when you‘re playing a drone for three hours. When a band plays so long they forget that they are even playing. And you can definitely feel a spiritual kind of thing. Personally I don‘t believe in the power of spirits but there‘s something in there that can attract interest.

Your song Near DT, MI is about Detroit. Do you, as a band, feel in any way connected to the town?
Our bass player Cameron has written that song- He‘s not here, I don‘t want to interfere (laughs). We went to the States already though and they seem to be really receptive to what we are doing. It‘s quite funny with some audiences including in America. It‘s kind of like people will latch on to it whatever band they like. They say some random math rock band I never heard of …oh it sounds definitely like that you‘ve been listening to that. It‘s like a Rorschach test. The thing with the influences in our band is that there are some elements you can see directly from the sounds of it but there are indirect influences in the way we do things too. They are just as potent but less apparent from just listening to it at first listen.

Any names you want to mention?
We‘ve been listening to a lot of Miles Davis like Get Up With It and On The Corner. My favourite is Filles De Kilimanjaro. Keith Jarrett also does good albums. He did a lot of improvisation records with keyboards but also did one on a pipe organ called Hymns/ Spheres, that‘s an excellent album. Of course course I‘m also a fan of classical music, recently I‘ve been listening to Alfred Schnittke. I like him and I like Arvo Pärt too. 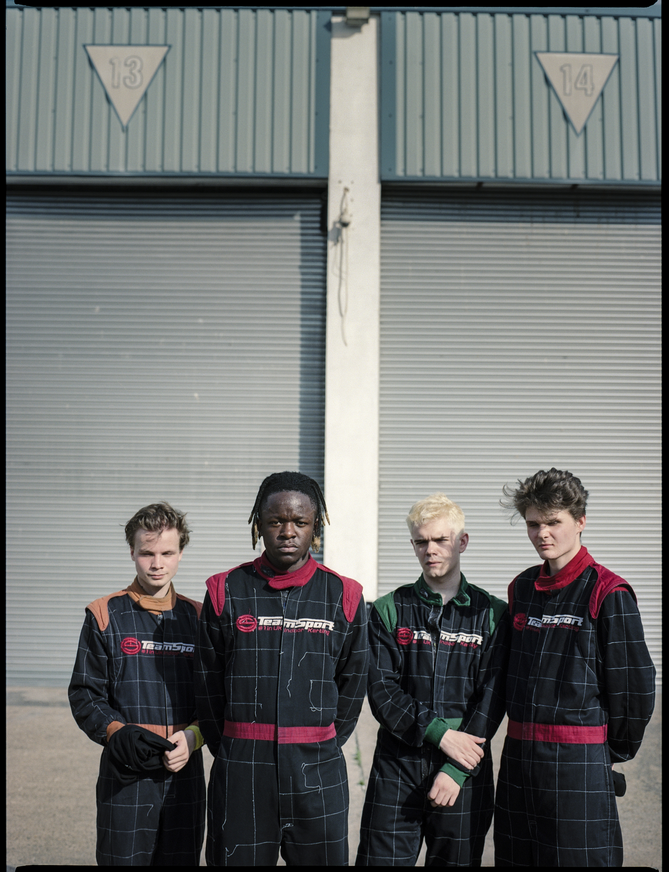 I should also ask about the fact you‘ve incorporated different sounds and different instruments on Schlagenheim like banjo, drum machines, piano and accordion. You‘re a very young band, still you‘re trying to expand your horizon, it seems.
Yeah, pretty much so. On a record it is impossible to exactly capture the energy-in-the- room-aspect of a live concert. We thought it might be good to make it sound different to a live concert so it‘s less comparable. It is two separate things for us. it‘s also something we wanted to do, we wanted nuances on the album and more details. It‘s not about having an accordion for the sake of having an accordion, it‘s about the sound of the accordion when it‘s played in certain way, when it‘s put in subtly like in Argentina. With the piano it felt like the producer had everything in his studio and the piano was miked up all the time. We just said on the spur of the moment: What about some piano on this part here? The great thing about the producer Dan Carey is that he really knows how to strike while the iron‘s hot. He‘ll hit record while you‘re still working out the part so you get that instant thing on a record. It‘s another great example for improvisation.

I have to ask you about your first name too…
Go ahead, do so.

You said you‘re from London but a Geordie is a person from Newcastle. Your accent certainly doesn‘t sound very Cockney. What is going on here?
I come from London, indeed. I might not show it in everything I do but it‘s the truth. My parents just liked the name and it‘s fine with me. It sounds good. There‘s no big interest in music from the North East for me that goes above everything else. I‘m not a fan of the local football club either, I‘m afraid (laughs). There‘s no bigger meaning behind the name.

Glad we‘ve cleared that one up, thanks very much for the chat. 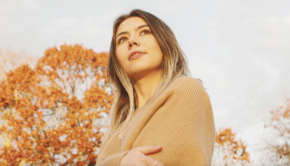