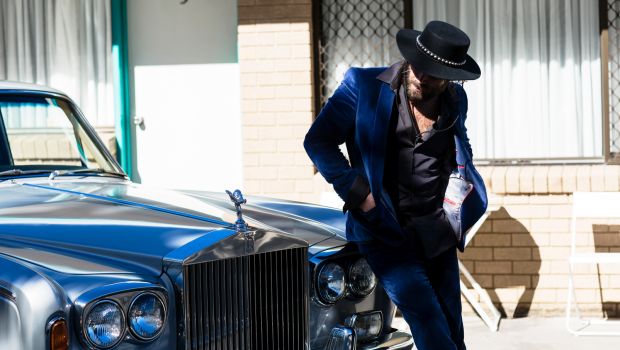 DOPE LEMON – Hey you! What ya doing‘ over there? 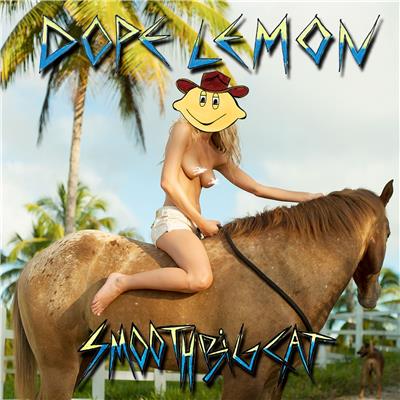 It’s an absolut delight virtually meeting you, thanks so much for taking the time to speak to me.
Nice to meet you too. Thanks for calling!

Also congrats on Salt & Pepper, which has literally just been released. What are the feels?
Yeah it feels great. We just put the video up a few hours ago. You know we just finished shooting the music video, we had lots of fun. Me and my friend, who is the director and filmer..

Stefan Jose you’re speaking about, right?
Stefan Jose, yes! Filming was cool. I had this concept that I always wanted to do. I wanted to buy an old Cadillac limousine and put it on a green screen and have me driving and sort of floating off into the galaxy smoking joints and just having a good time. So we did that, I bought a Cadillac limo..

Casually, as you do..
Ha, yeah. Stefan came up with this idea that there’d be multiple characters and it sort of evolved in that way. It was really fun to make, obviously I love the song and I love working with Stefan and it all worked out really well.

Honey Bones in 2016 was followed by the Hounds Tooth EP and now Smooth Big Cat is coming out soon. How do you feel you have developed as a band creating together?
A lot has changed. Me personally and also with the project. The first record was made with a bunch of friends all at this house on the beach, drinking bears and experimenting with drugs and it was quite a wild time. And Honey Bones, that’s what came off that time. I think it’s been two years and me, I feel like this record is a little bit more about how I’m feeling these days. The style of music represents, where I’m at, at the moment with life. It changed also in a way, because I played all the instruments on this record. It was very much just me and the engineer Paul staying out late, drinking whiskey and just creating, which was different. He’s an old friend. If you go back to all the records, he’s been our number one engineer for a lot of records. We live in the same town and we have a strong friendship around music and life in general. It’s one of those things. When you’ve got a friend who you feel comfortable around enough to create in such a way, I cherish that in friendships.

Ah that sounds utterly special. When the connection is already there and you create from that space..
Sure!

You did create the album at Belafonte Studio, on your farm in the Byron hinterlands? I wondered how much of the space and land fed into the record?
Yeah, correct. You know.. I was talking to a friend about it just today. How much your environment plays a part in what you create. I mean, short answer to it is absolutely. It’s got everything to do with it. But at the same time, I feel like sometimes your environment sort of disappears. You find this subject or character, that you’re creating a story around and you end up falling into another world with that character. I feel like for me songwriting is a way to escape. It doesn’t matter where you are, you can be anywhere. That’s why I love writing music, how lost you can find yourself. And the experience along the way is so important. There are so many unknowns, but if you believe in what you’re doing then you can see the light at the end of the tunnel. And you come out and you have this really cool thing in front of you, that you got on to share with the world. I don’t know where I was going with that, but I guess the important part is, that it’s got everything and nothing to do with it at the same time. 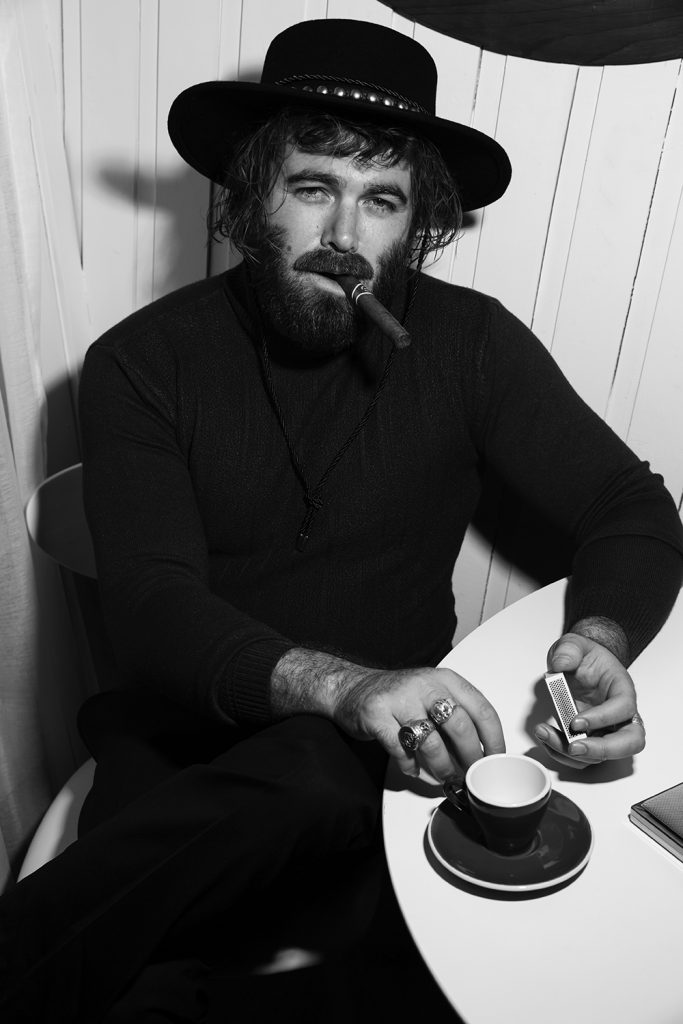 It doesn’t matter, it sounded beautiful and I totally get it! Maybe it’s kind of a starting point, I guess if you are in a space where you can see the light at the end of the tunnel, then you attract certain people who can take or hold your hand and join you en route?
That’s right, absolutely. I guess you start off with a cool place to launch and you blast off together.

I mean is there any other place you could imagine yourself living at and working from?
I would love to move over to Germany actually. I had great experiences there, I love the food and the drinking culture. Invite me over and I’d totally move over and make a record.

Okay awesome!
Yeah but honestly, I really would like to move somewhere over in Germany and try something different. I’ve been here for so long, that I’m starting to feel like I need to explore and see what happens to the music, when that happens and I travel a bit more and create in different areas.

You said earlier that when you write music, you create characters. Is that how the album started too?
Every song is different, in the way it comes together. Smooth Big Cat, the story of the smooth big cat, he’s a fictional character I made up for one of the songs. What he represents is really important to me. He’s kind of this cool cat, he doesn’t have any specs in all nonsense going on in the world. He arrived at the right time, when he needs to take a step back from it all. He likes hanging out and listening to records and drinking whiskey. Over the duration of the record, these characters became this really cool totem and when I listen to the music, it makes me feel really at home. And he became the title of the record, Smooth Big Cat.

„When you’re feeling lost or a shade of blue, you can look to the smooth big cat, and he’ll point you down the road you want to travel“ it says in your PR statement. Sounds like someone made it through moments of uncertainty?
I guess he’s become the light that I look to. This person I created to help me through things.

Did you have specific plans for the album?
No, not at all. I woke up one morning, called up the engineer told him that I had some tim off and that I wanted to make some music. We started off with a few days and it felt great. There was lots of stuff to say and talk about and also in the music. Then it starts snowballing and perpetuates into this really flowing cool thing. We sort of just went with it and suddenly you’ve got a whole record in front of you.

Dope Lemon doesn’t seem to shy away from experiencing and simply tagging along with what feels right.
I think in a big way that’s what Dope Lemon represents. In life you only have what’s in front of you in this moment right now and then it’s gone. I try not to get caught up and feel restricted in the way that I do things. I always approach things with a whole heart. That’s what I’m trying to do with Dope Lemon, to not be afraid and to dive into what’s there and to see what happens. And great things happen from that. You gotta believe in it and keep your eyes open and keep going.

Why did you choose to have women represent your music on the covers?
The female body is the most beautiful thing on planet earth. I think a lot of people would agree with me on that. It all started with my friend who is a photographer and who was staying at the property and she had these photos. These really amazing photos of these girls. She shoots girls in this really interesting way. Her boyfriend at the time painted the lemon face for me. I asked him if he could paint it on one of her photos and it was really nice, because they were lovers. When he did that I just really loved it. It looked cool and interesting and different and made me feel stuff. It went well with the music. It was one of those things, it was random and it happened and kept happening. The new cover for Smooth Big Cat, it actually came from German Playboy magazine. My manager had to find out where the image came from and eventually it led us to the magazine. I don’t know the girls name, but we had to buy the image off Playboy and it was quite difficult. But I fell in love with the photo and once I’ve fallen in love with something it’s really hard to change my mind.

You’re embarking on an Australian headline tour soon, followed by Europe for the first time with the Lemon Crew – how does it differ to play over here vs. at home in OZ?
Our record sold really well in Europe and the UK and it’s kind of an indicator that things were going well there. I get a lot of people writing to me saying, can you please come to all parts through Europe. It kept happening over the space of four years and eventually we’re doing it. We love it over there and it’s a really great way to see over there again and share the music.

Did you think this was going to be a long-term project, touring live and such from the beginning?
No. I thought it would be something where I just go to the studio and it’d be a really underground thing. I didn’t think too much of it. Julia and I had been so focused on touring and making music, I really didn’t imagine that we’d be traveling so much with Dope Lemon. I feel really honoured and humbled, very lucky.

Aside from your work with Julia, you released music as Lady of the Sunshine, Broken Brights under your own name followed by Dope Lemon. Why did you decide to create a whole new solo project again?
I just had things on my mind that I wanted to sing about and I just wanted to get creative again. I think when you travel around the world as extensively as Julia and I did, when you come home off the back of one of those tours you either just want to die or just start creating and getting back into the flow of that feeling again. I came off the back of that tour and I felt like I wanted to get back into Dope Lemon and it really made me feel alive again. I guess it felt like the right time.