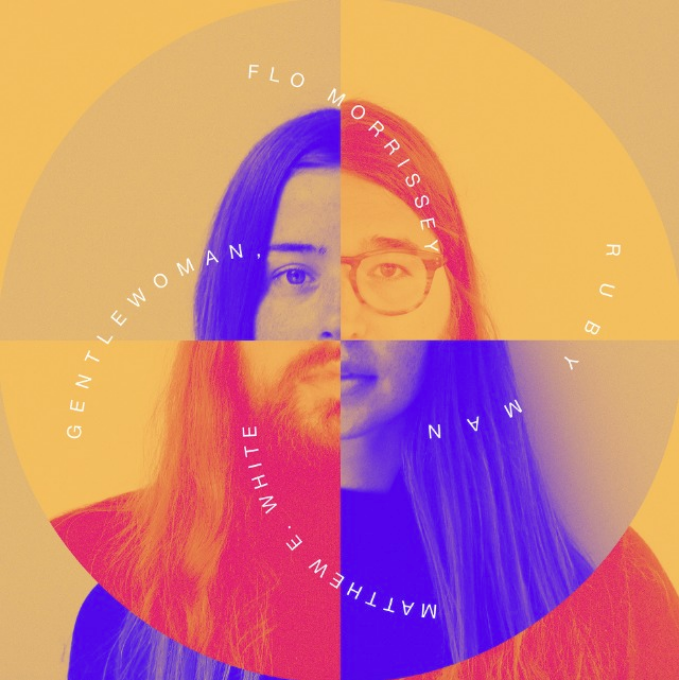 How did you guys first meet?
F: We were both written about on an article for the Guardian online after the release of my first record and Matthew’s second; I’d already heard of Matt’s music before but he’d never heard of mine. And he seemed to like what he heard and then followed me on twitter, reached out and said I like what you’re doing. We had a back and forth of talking and accumulating a friendship over email and the internet for like a year and then we were both part of a Lee Hazelwood tribute last year for the Barbican, both put together for a duet. And then that really felt very natural and worked and that’s when we were like we should make a record together. And that also felt very resonate with me so we made the record in Richmond in July. So that’s the kind of background.

Why did you choose to do a cover album as opposed to an original album?
M: Flo and I already agreed a lot on art and poetry and things like that, and we definitely have a very similar sense of aesthetics. And I think that was very fun for the both of us to find someone who has similar sort of values in that way. And in a way a covers album is just a continuation of that where we can share songs and talk about how they might work. It was just a way to continue our already special relationship where we share songs and art together. Trying to squeeze a record in in the sense that we both have solo careers, this was quite a left turn anyway to try and make it work. So there’s just a pragmatic element writing a whole new set of songs together – it can be a very long and trying process. To keep it light and help it move forward and fun, it made a lot of sense to focus on covers.

How did you go about choosing which songs you would cover?
F: Well we skyped a lot. I was living in Paris and Matt was living in Richmond. So we made a Spotify playlist which started off as 700 songs with the typical duet records. But also songs which weren’t necessarily duets but songs that we were inspired by and wanted to share with each other. And then little by little, but I didn’t feel like we were harrowing away at it, we managed to take it down to 10 songs. Obviously there was sometimes a little bit more discussion about one song over the other but most of the time, if not all of the time, we had a pretty coherent understanding and same view and vision about what we were doing in life and this album, so it was pretty easy to get the 10 songs.

Do you think you’ve influenced each other by working with each other?
F: Well for me I think yeah definitely. It’s mainly that the whole experience, and like Matt was saying the sharing of the like minds and the art and poetry and going to Richmond and pushing myself in new genres and allowing myself to be confident in new situations, with new people, that of course made me grow and consequently for my own writing has definitely made me more intentional about what I can offer as an individual and what maybe I can’t offer. Which is definitely important. I feel very grateful for that

M: I like collaborating with people but I’m very stingy with who I actually collaborate with. I think anytime I find someone who can be added to that group that I trust and feel like knows where I’m coming from and the place I’m making art from, that’s a really special relationship. We’ve said this a lot, but there’s no real knowing if we’re ganna do another one of these, but for me, Flo is just now a part of an inner circle of people that I respect and it’s invaluable to have someone like that. It’ll help me and continue to affect my way of creating which is, you know, really special as an artist.

Do you think it’ll be strange to go your separate ways now that the album is finished?
F: No I don’t think so. I mean we both have our own voices anyways and are solo artists, I think this has just been a merging of something special but we’re not dependent on the other. This was an exciting new opportunity for us to collaborate our ideas.

M: I think this works because it is separate from our solo careers and it helps strengthen those. But they kind of have to work side by side. Because they work side by side its nice to step away from that. When I go back to that its very refreshing and again, Flo’s there for me to talk to when I need to. It’s been a very nice breath of fresh air to be working with somebody else but mostly because when I’m working on my own, and with Flo too, it’s like you’re driving your own train. At the same time its rewarding but I think the main thing is just encouragement. It’s nice to have both of them and they both strengthen each other.

You seem to get on really well, was this the same when recording in the studio?
F: Yeah it was a very good situation: going to Virginia in July with beautiful weather and beautiful company, and we had 10 days to record 10 songs. Work from 12 to 12 so you know very hard. But we had an understanding there cause we’d obviously spoken a lot over skype but we hadn’t had that face to face. But I just felt very welcomed and generally it was very smooth and one of my favorite places, if not my favorite place, in America.

M: Yeah I agree with all of that. It was very very easy, all of that I think was just a reflection of Flo and I’s relationship. Just very trusting, kind. We’re not doing this collaboration because our label suggested it or for any professional reasons, it was just an idea that we had based on nice friendship that was developing and the studio kind of stripped a relationship down to what it is you know cause it can be a very stressful environment, and you’re working really really hard and making important decisions so there’s a lot of your egos at work, pride, selfishness, all of the stuff that will test a relationship and I think the studio was just an affirmation of our way of communicating and our relationship was really nice and strong.

Is it something you’d both do again?
F: Yeah I’m also very particular with, it sounds weird, but who I share myself with. But for me this has been the first time I’ve tried co writing and that whole other art form. Most of the time it’s about being individual but yeah I’m open to it and seeing what comes my way. But right now I’m feeling like I’m happy to just go back to the studio by myself and start writing, and then will be nice to go back to touring and doing stuff with Matt. The balance is just really nice.

M: I would echo that. I mean I do a lot of producing for other folks but I think I have a very collaborative nature. This is different in a sense that when I do productive jobs I take them on as a leader or a project and I know that I call the shots ultimately. But with this it wasn’t like that, it was Flo and I together making decisions. Which although great I think it’s extremely rare to find someone that you can agree and work with on those decisions. I’m definitely open to all of that in the future but I think it is rare.

F: I think its important to not be considered as artists who just collab. But it’s a done thing a lot, I always find it a lot more beautiful and true in those artists who are very specific about who they want to work with and make it right. There are those opportunities and you have to be very particular.

And finally, what are both your plans for 2017?
M: I’m in the very beginning stages of working on my new record so hopefully I’ll be done recording that by the end of next year. But it’s just getting down to writing now, a long way to go. Also a couple of production things coming up which I’m excited about but that’s all I can say about that.

F: Yeah for me it’s similar. I’m excited to write my second record and release it maybe the next year and also the tour with Matt in February. I’m not setting too many new years resolutions but little things like being more patient, learn Japanese but I know that’s not directly about music.