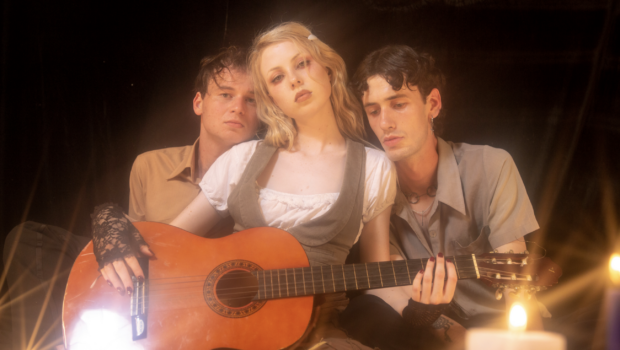 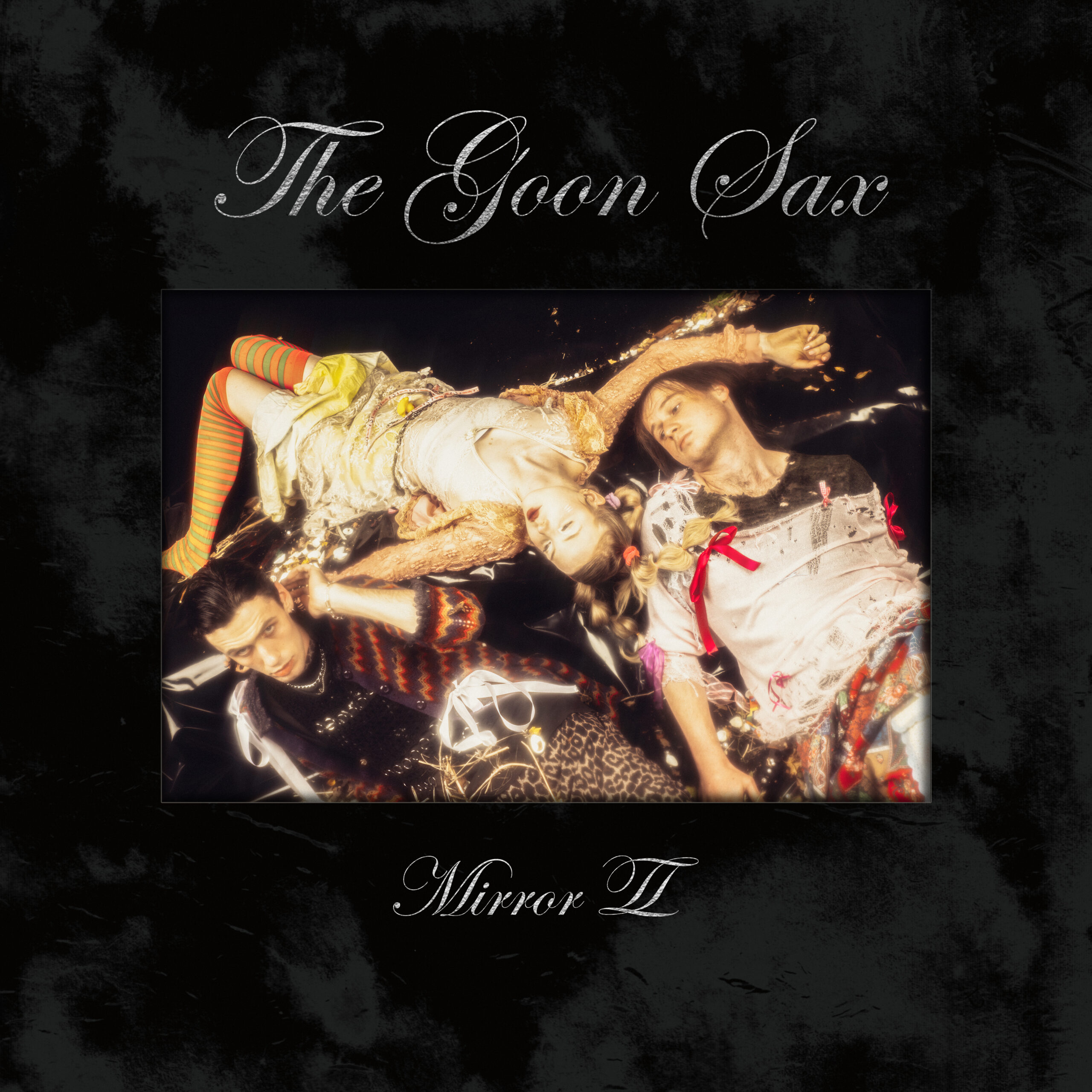 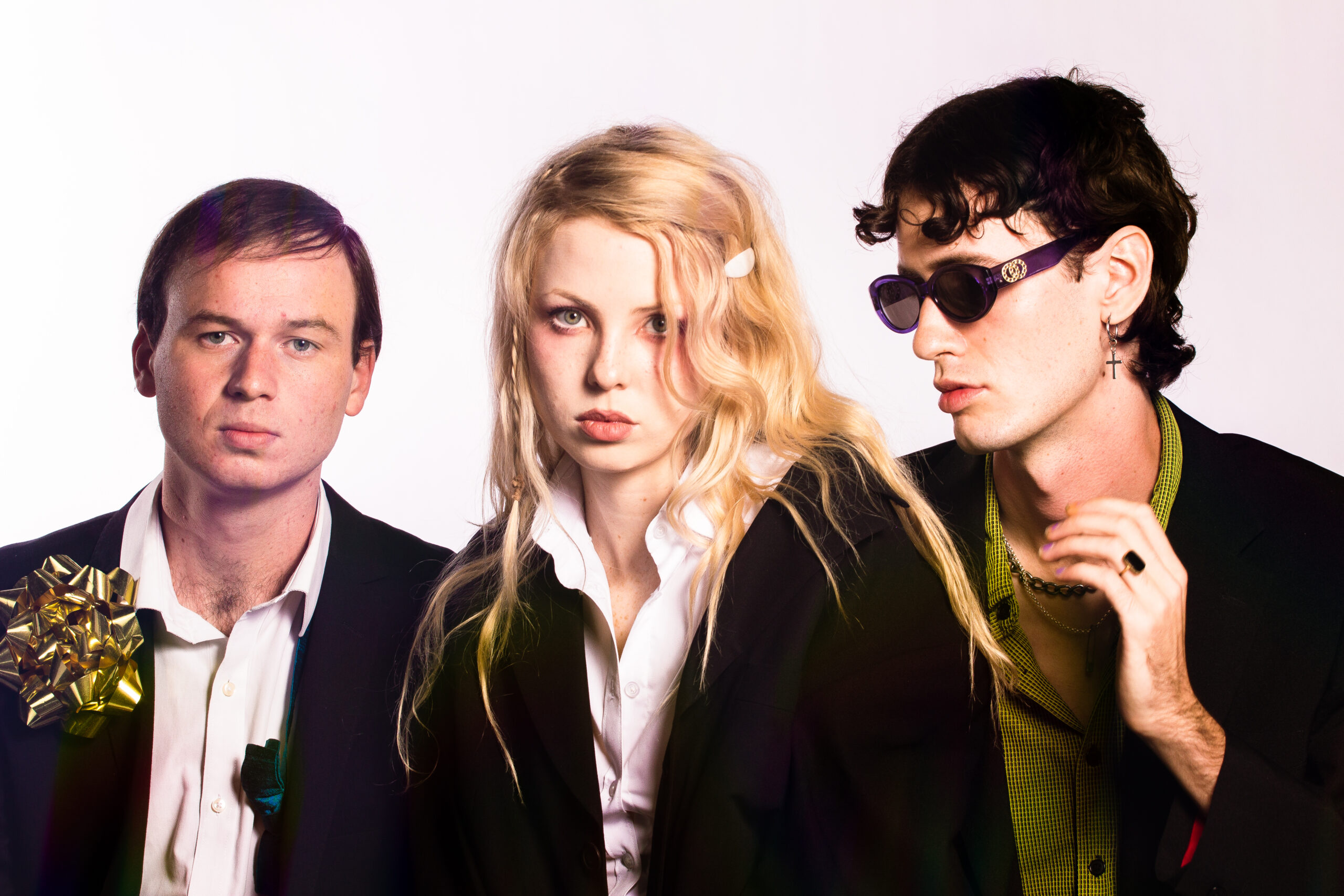 How‘s the feeling in the band in 2021 with a new record coming out after the first waves of a pandemic?
Riley: It‘s a feeling of relief.
Louis: We‘re releasing it into a different world we recorded and wrote it in. It‘s funny seeing the lyrics sound different, there‘s a lyric on Til Dawn that people have asked me if it‘s about Covid, because it has a reference to not being able to go outside (laughs). We‘ve recorded the album in January, February of 2020 in Bristol and got back here just as lockdown was beginning.

Why did you choose the Invada Studios in Bristol with John Parish working as the producer?
James: I‘ve been finding recently that it‘s good to take things in steps. We‘ve written the album and then produced it a bit by ourselves and the last process was leaving town. It felt productive to do so.
Riley: It was really for important for us to leave the town, where we‘ve done all the writing and to be somewhere, where we can fully immerse ourselves in recording. We didn‘t know anyone in Bristol when we got there. We would be in the studio from 10 to 10 every day and then we would go to sleep and wake up and go straight back to the studio. It‘s great to be free of all the distractions.

From to 10 to 10 and then bedtime? You didn‘t go out in Bristol to enjoy some nightlife as young people? Come on…
Riley: We had a few days off, it was important that we had weekends.
Louis: Making a record is so much about entering this space we create together. Going to a city, where none of us know many people and where we are spending every moment together really allows that space to be constant and unbroken. It really helped us to make the record.
James: When we‘re together I can really feel it. When we have a goal together I can feel it in my body and the way we talk to each other just meant…the whole point about being a band is to work together and add to what each member has to offer. 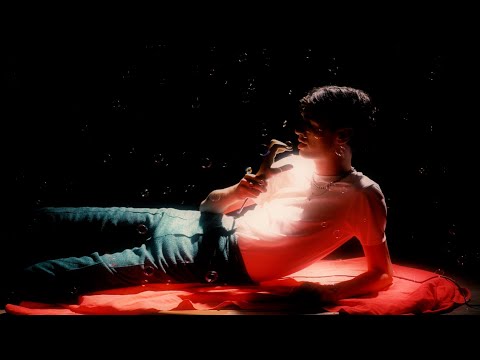 You‘re talking about a space you like to inhabit. How different was the space this time around compared the ones you‘ve gone into before?
Louis: We were living together around the last year that we were writing this record. We spoke about it as almost like a physical space we were trying to make, something dark and textured and wet. Water was very much a thing and leaf type of textures on the ground. We talked about it like a place we could inhabit. I don‘t think we did that so much on the previous records. On those we wrote songs and thought about what they meant later. This time we had a world we were building and we were writing songs that helped us to expand and freshen up that world. We didn‘t just write twelve songs, it was like a whole process that each and every one of us was adding to. We knew how to tie everything together and how it spoke to each other. We wouldn‘t have had the confidence to do that before. 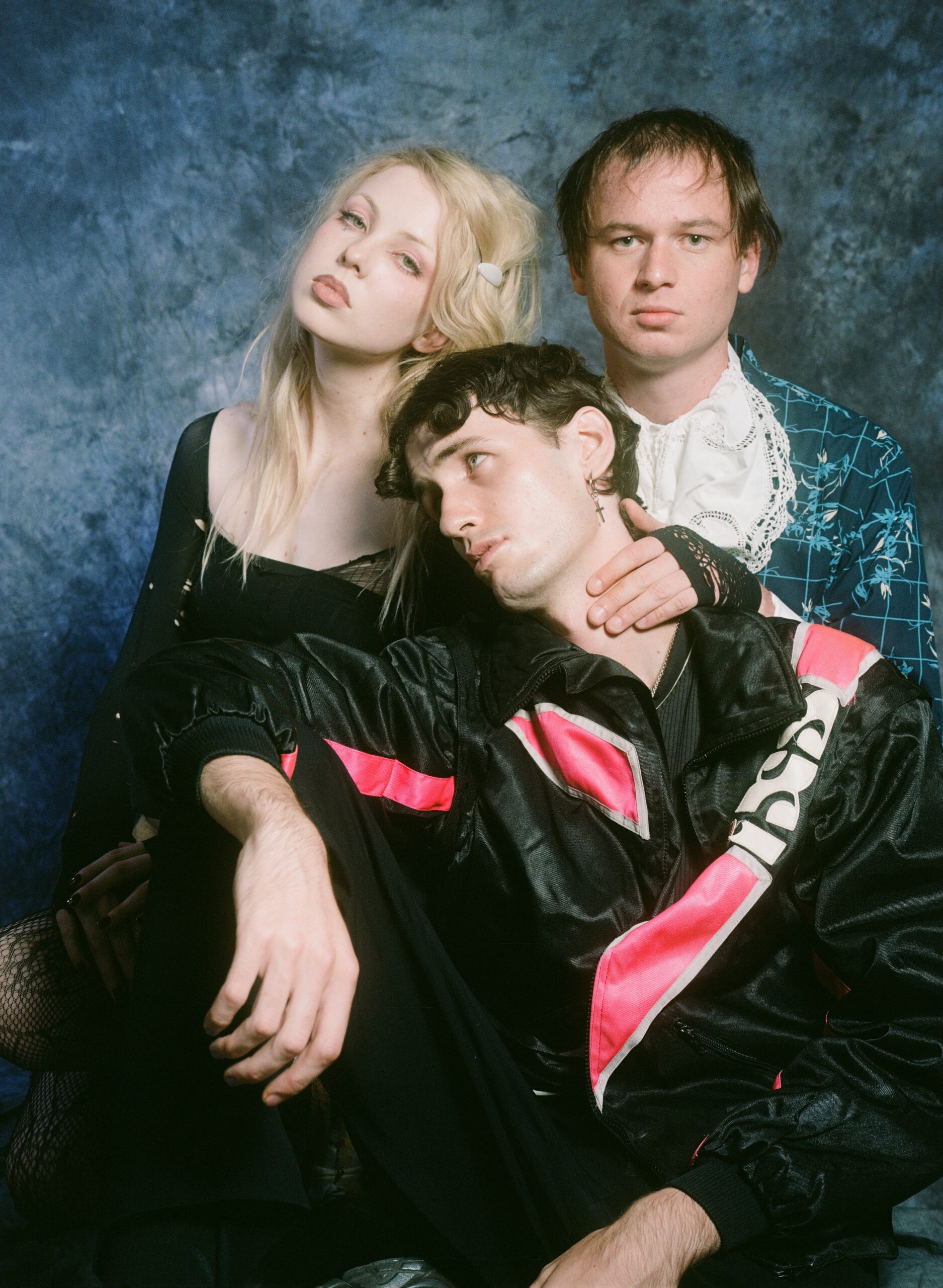 It was quite apparent that you‘re completely into pop. There are a lot of melodies on Mirror II too. But it‘s not the same as it was earlier in your career. You‘re going beyond mere accessibility by leaning towards psychedelic rock, in this case coming from Japan in particular. Are you trying to get into a world that is harder to explain?
Riley: I think so. It took us a while to get to this album. We wrote ten songs before, that were scrapped. They were definitely more angular and No Wave-y and Beefheart-inspired. To be able to write this album we had to grow beyond that, because we still want to write something that is accessible and has strong melodies and hooks. For the three of us it‘s important to have both influences in our music. We want to able to cross over, we want to explore our other influences, but also want to stay true to what this band is and what it means to us.
Louis: It felt to me that what we were making was true and interesting and challenging us, but I also felt we had lost a bit what was so inherent to this band, which was making weirder ideas work in the context of melodies. It‘s the feeling of those melodies I really missed.
James: When Louis got back from Berlin and Riley and I had been playing in Soot and we reformed, we tried playing more angularly with some of my guitar parts taking influence from PIL and stuff. Then we decided at some point that we didn‘t want to do it as much. Some of those elements are still there, but they moved along to be in a world which we had created instead of one in which we were trying to be different from before. It‘s funny thinking about some of the guitar parts of mine in the really old songs, where I was thinking of PIL. Then it eventually changed over three years to become its own sound and it all adapted.

Why do you as a young band find post punk from the end of the 70s exciting today?
James: I think it still has edge.
Louis: I think people reference that music too much in an uncritical way by not adding anything to it. To some a record still sounds good, so they think: Let‘s do it again, because it‘s about ten years since somebody revived this. There are things to be taken out of PIL people do really well. PIL‘s ideas can still be expanded upon, because in some ways they were very different and their initial ideas can still grow.
Riley: I remember listening to Flowers Of Romance for the first time and feeling it hit a spot that nothing else had that I had heard up to that point. I really like heaviness of it and the repetition. It‘s definitely nerdy music, but I think a lot of people who take music seriously enough to play in a band are quite nerdy about music. I can definitely see the appeal, but I also feel I‘ve moved past that phase personally. I wonder, if other people moved past that phase as well.

Let‘s talk about some ideas on the new Goon Sax album. Psychic is quite rowdy compared to many other tracks and you can also hear some synthpop in there. Electronic music, hurrah! Please shed some light.
Louis: Sonically we were referencing noisier elements, but Sky Ferreira was also a massive influence on that song. She has a lot of noisy ferocious pop music. I really wanted to write a pop song that felt like it was breaking at the seams, like it had this metric beat and was very controlled and also shaking and messy like a Stooges song that felt unhinged. The guitar sound on that one was referencing Les Rallizes Dénudés, we‘re also getting back to a band like The Jesus & Mary Chain. 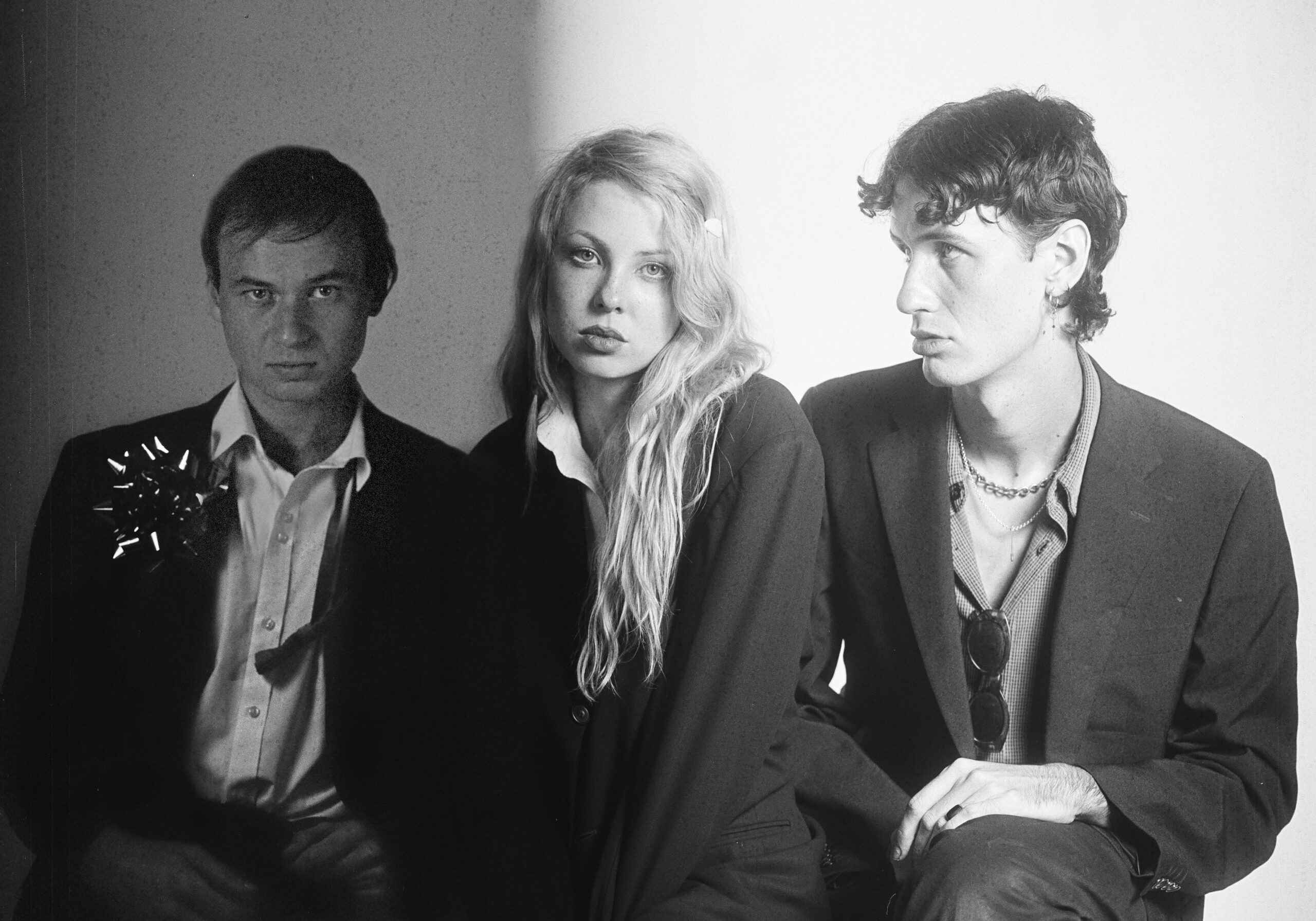 On Bathwater we can hear a saxophone which might seem fitting, given the band‘s name. It‘s also worth pointing out that Louis is singing in German at the end. Why here?
Louis: It‘s the oldest song on the record, it‘s the only one I started writing when I was living in Berlin at the end of 2017. I‘ve gotten pneumonia from not living healthily. I was getting home late a lot from my work at 3am, because I was working in a cinema. I was really really sick. The song was partly about that experience, but at the same time I wrote it when I was home with pneumonia and I was playing a bass not plugged in. The lyric was in German because of the situation I was in. I had been at work and was locked out of my apartment. My partner was inside and she‘d fallen asleep with the key. I was outside my building speaking German all night. I was thinking in German, my head was in German. I wrote down some things on my phone and it was in German. Then it felt dishonest to change the language when putting it into that song. The songs create a snaphot of our heads in a moment of our life and where we were at, and it being in German that‘s what I was hearing around me. And we always wanted a saxophone. I love a sax solo, I‘m all over the moon when I hear one. 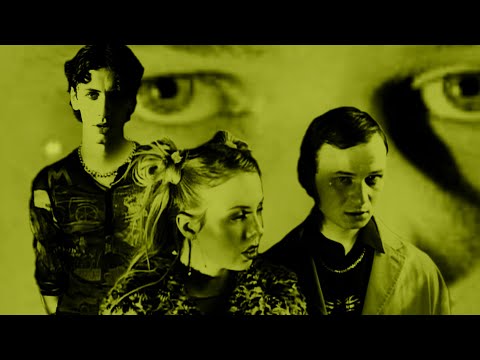 Why did you choose to go to Berlin, of all places?
Louis: There was no real reason. I felt an affinity with it. I always had a really good time there. I visited it two or three times prior to moving there. I still really love Berlin, I‘m not sure why.

Was it at a time when the three of you needed a bit of distance from The Goon Sax?
Riley: I started Soot after we got back to Brisbane from that trip. It was the first opportunity we had to make music outside of The Goon Sax, so I took it. We ended up touring Japan, that was amazing. I think we did need a break. Up until that point Louis just finished school. We had been touring a lot and we just found ourselves in different places initially. James and I had planned to move to Berlin as well, but when we got there it just didn‘t seem like it was a very smart idea for us. It was very cold too.
James: I was lucky to be asked to play in the band Soot. I didn‘t know if I needed a break. I talked to Riley and Louis all the time. But in a different band situation I was able to listen to new music, meet new people and figure out who I was in that period of my life.

How active have you been recently during the pandemic as musicians? Are you planning to release more in the not too distant future?
Riley: I‘ve been playing in a few different noise bands in Brisbane, there is a strong experimental music scene that‘s really flourished over the Covid period, which is really cool. And I also studied sound engineering, that got me really busy during 2020. But I haven‘t written a song in a long time. Sometimes I need the push of an album. But we‘ve been living this album for a whole year. We‘ve been doing lots of videos, artwork and photo shoots.
Louis: I think we‘ve all got very different songwriting processes. Riley sits down to write a song with so much intention and almost saves it up. It‘s like being written inside of her subconsciously. Then you sit down on an instrument when you haven‘t in two months and it just comes out. I write three terrible songs a day and about every two months I like one of them. Riley has an infinitely higher hit rate than I do writing good songs. And James is somewhere between those two polar extremes, he‘s got a totally different method. In the end it all comes together in one nice way or another. All three members of the band contribute at the same time and in the end we sense a particular magic that we can enjoy together. We like it.
James: Yes, we do. 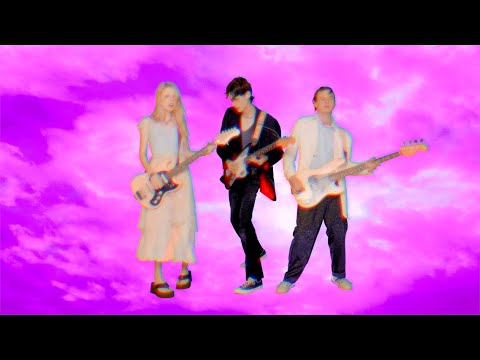 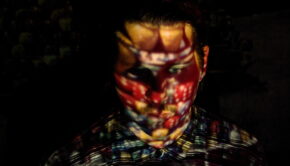 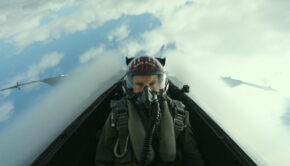 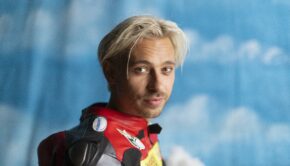