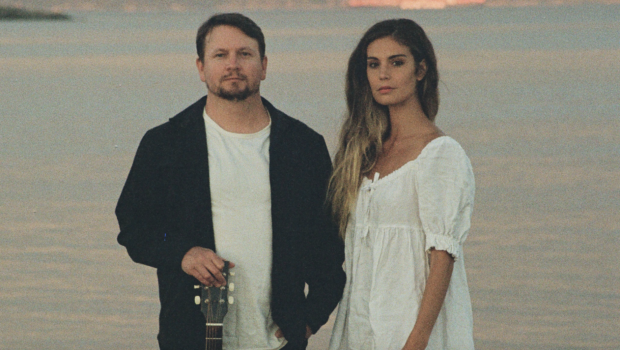 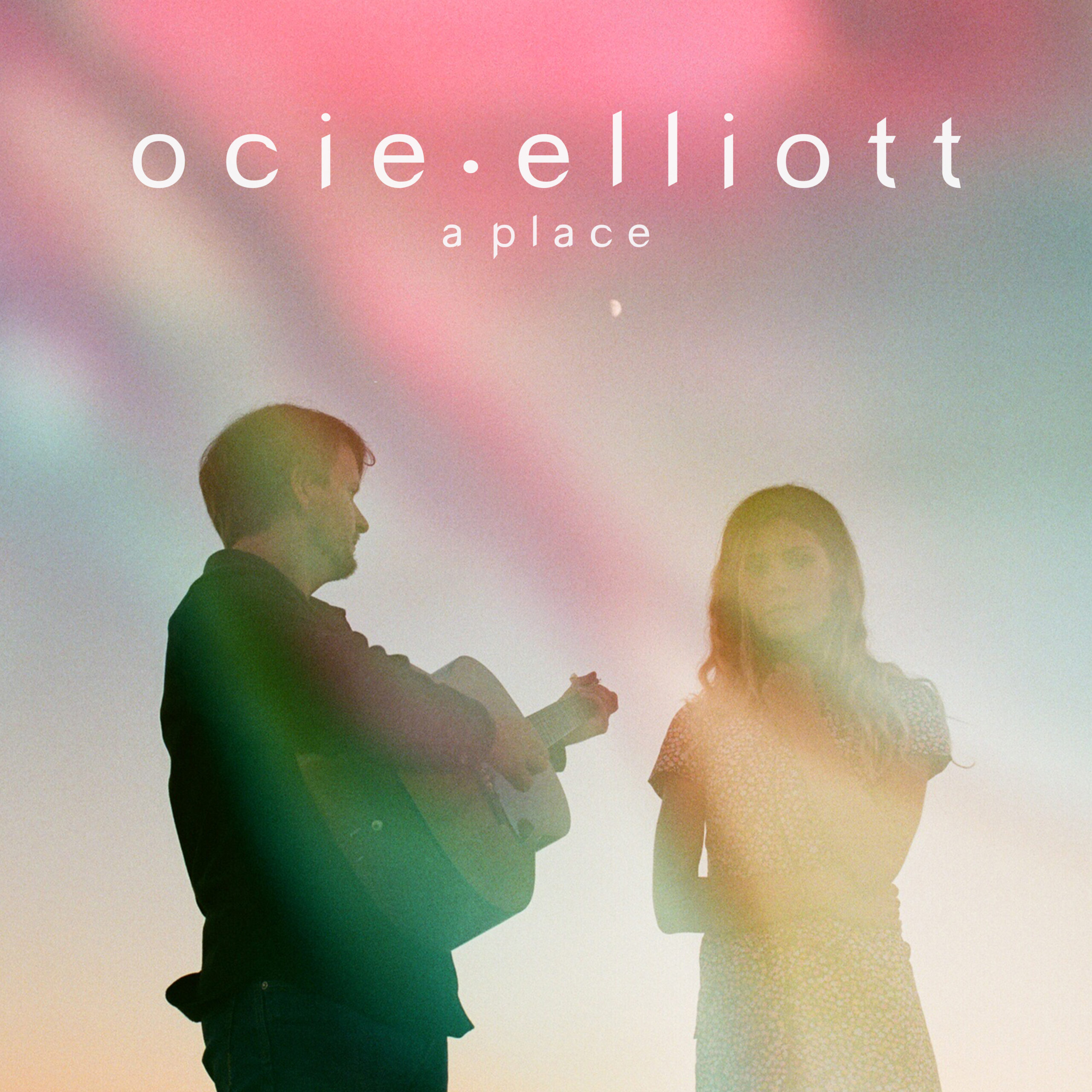 First things first: it’s been a strange year. How and when did A Place come together?
Jon: We recorded in July last year for a different EP, Slow Tide. When we were recording that one, we kind of had it in mind that we were gonna do some more songs after that. But after recording Slow Tide we had so much inspiration to keep writing. So after recording we came back and spent summer writing the songs and finished them up and getting them ready for recording, which we did in September. We knew that the fall and winter was gonna suck and we knew we needed some music to get us through.

What does your creative process usually look like between you? Apart from when a hard winter is approaching, what usually gets you into writing?
Jon: What do you think?
Sierra: It kind of depends. It’s usually one of us playing something and the other person connecting with it.
Jon: It’s like a mutual.. affirmation. We definitely try to do writing retreats, which are usually pretty brief, maybe three or four days. We find that at home we can write stuff, but it’s a lot slower. We have all these ideas forming and happening, but until we actually focus for a couple of days at least, that’s when we get most of the final work or the valuable work done. Constructing the songs and everything.

Where is your starting point. Do you start with melodies or lyrics..?
Sierra: It’s usually melodies or even chords.
Jon: A couple of our songs formed from Sierra playing some sort of keyboard line and me being in the room with her and being like, what is that? We stop and record it or jam over it singing, being ridiculous and making up melodies. A lot of our most favourite songs have come from that. Hearing something that we like and then going from there.
Sierra: And then harmonies and the last thing we usually do is lyrics. Although sometimes a lyrical line might just come naturally as the song progresses and then we just keep that and work around it.

Oh what was that?
Jon: Just a bird. It’s funny where we live, sometimes there’s a little racoon family that lives right there behind us. Sometimes they’ll poke their little heads out.

How was your process changed during the pandemic?
Sierra: It was definitely tough in the beginning to feel inspired to write something. Mostly because what we were going through, it was almost like we didn’t want to process it now in the moment. We wanted to write about something else other than the pandemic, because we were so sick of being in that state. That was challenging having to try to find something else to think about and care about.
Jon: Yeah. Although at the end we still, not directly, but still ended up writing a little about it. It’s hard to avoid, but there was definitely some hope that it would just end and not wanting to focus energy on something that we didn’t know the scale of. You don’t want to all of a sudden have this album dedicated to a pandemic and three month later it’s over and you’re putting that out into the world. And people don’t want to hear about it. 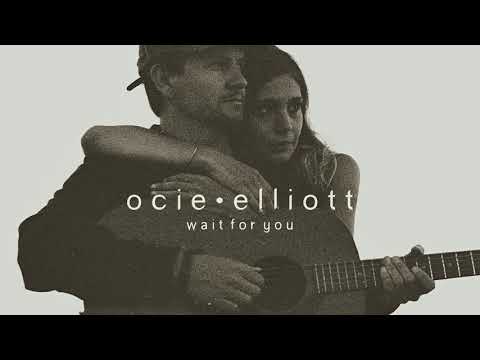 Is there a song on the EP that is particularly meaningful to you?
Jon: Personally for me the most meaningful one for me is A Place, the title track. I guess because it is the most personal, it was written about playing one of our only shows last summer on Salt Spring Island, where Sierra is from. It was an okay show, it felt kind of weird in some ways. We were supposed to have done a bunch of European touring and play big festivals and all of a sudden we’re playing a show. It was great to play, but it also felt like, well, like going back down to the minor leagues. It was a bittersweet thing so it felt good, but it also felt like we missed out on all these tours.. and so it was emotional. After that show we went back and both our families were there. We went back to Sierra’s parents‘ house and the whole lyric content for that song came from that whole experience. It was one of those things that was really nice, but also really emotional in a bittersweet melancholic kind of way.

Where were you while working on the EP? How much do you think the environment you’re in informs the music you create?
Jon: We worked on it a little at my parent’s house. But we also went to this place an hour from where we live to get a bit more into the songs. We feel really great about the output we’ve done, but at the same time we were missing the road and touring, because it does… to have those different experiences really informs your music. To be on the road, to travel, to play in front of people. So when you’re in the same environment, which is at home mostly, in our own place, we draw a lot from that, but we’re feeling now that we want to draw from something else. That’s a challenge we’re finding right now, we want to get back out there. 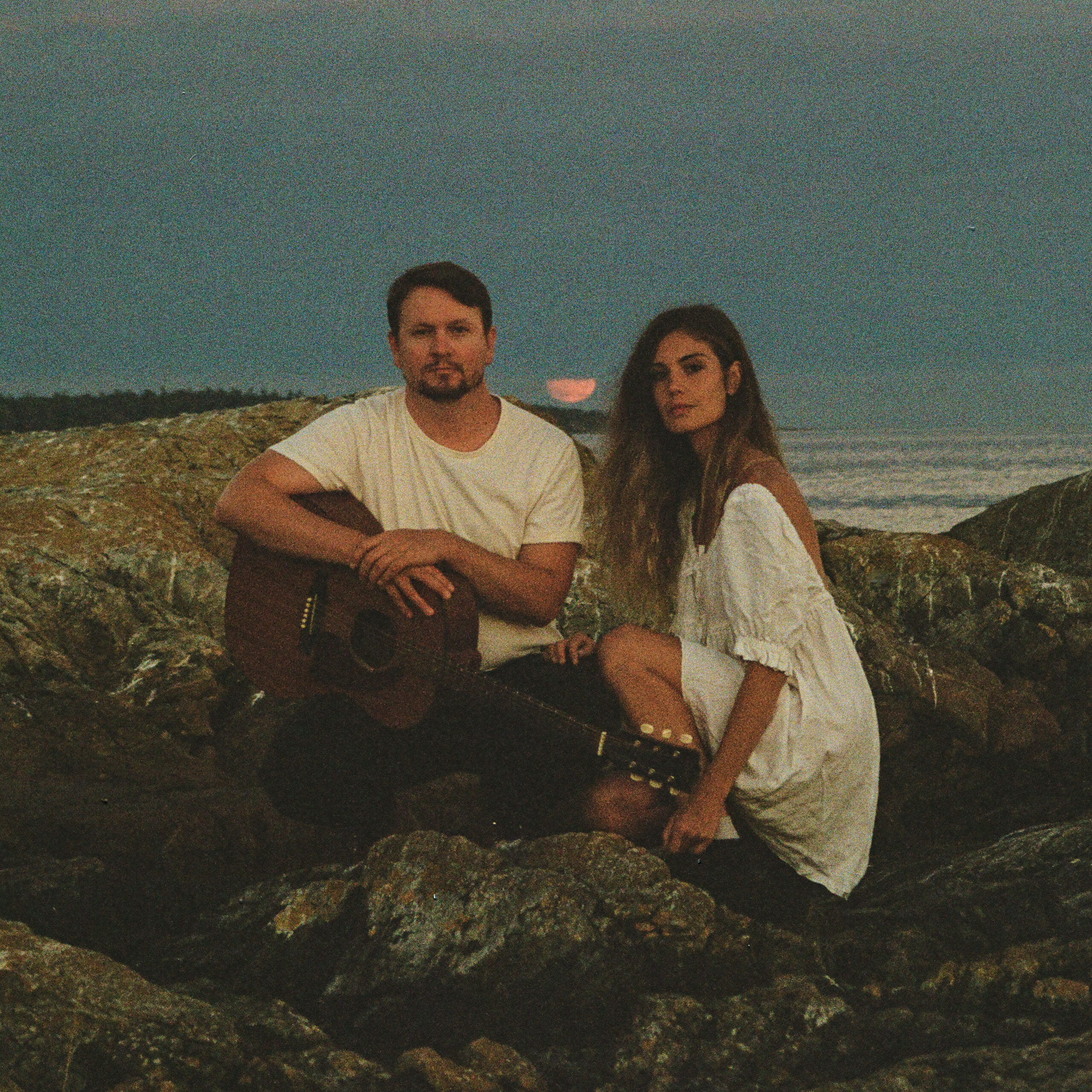 Do you usually write a lot on the road or more when you’re going back home, where you’ve got your creative haven so to say?
Sierra: I definitely find lyrics easier to write on the road, but I think musically.. we actually write a lot when warming up during sound checks and before we play or especially if we have a day off on the road. That can be a good time to write. When you’re playing a lot of music, it’s like when you record too, you end up being inspired to write more and to play more. It’s definitely a super fruitful time for creation.
Jon: You’ve got all the melodies going though your head and all these conversations and images and you just feel inspired.

How has your collaboration changed since you first sang together in Salt Spring Island a few years ago?
Jon: It’s come a long way. At the basis of our collaboration is we’ve always tried to keep the harmony as being a very central part of it. And so that part hasn’t changed as much.
Sierra: That’s definitely the crux of our thing, the harmonies. But I think we have been more exploratory with different sounds and even adding the keyboards is big.

Those beautiful harmonies give us listeners a glimpse into the strong connection you must have…
Jon: Since we first came together and what drew us together initially at all, as soon as we sang together that was our thing. We were just like, oh wow, this sounds, this feels, it wasn’t sounds, amazing. And so that’s what we tried to keep focusing on, that aspect of our collaboration.

Is there a song that you perform together that makes you feel like specifically connected?
Sierra: Personally, two songs come to mind – of ours anyways. I Got You, Honey and Forest Floor.
Jon: I’d agree with that.
Sierra: And then we do a couple covers too, mostly because that’s where we started. It always brings us back to our beginnings and our core and it’s very stripped down. Two covers in particular, Simon & Garfunkel, The Boxer and Gillian Welsh, Look at Miss Ohio. Both of the songs we sing together the whole time, so in order to sing it really well, we have to be really connected. I know exactly when he’s going to breathe. Sometimes we breath together and sometimes we wait so that the sound continues or the other person breathes..
Jon: And sometimes we mess up together too. 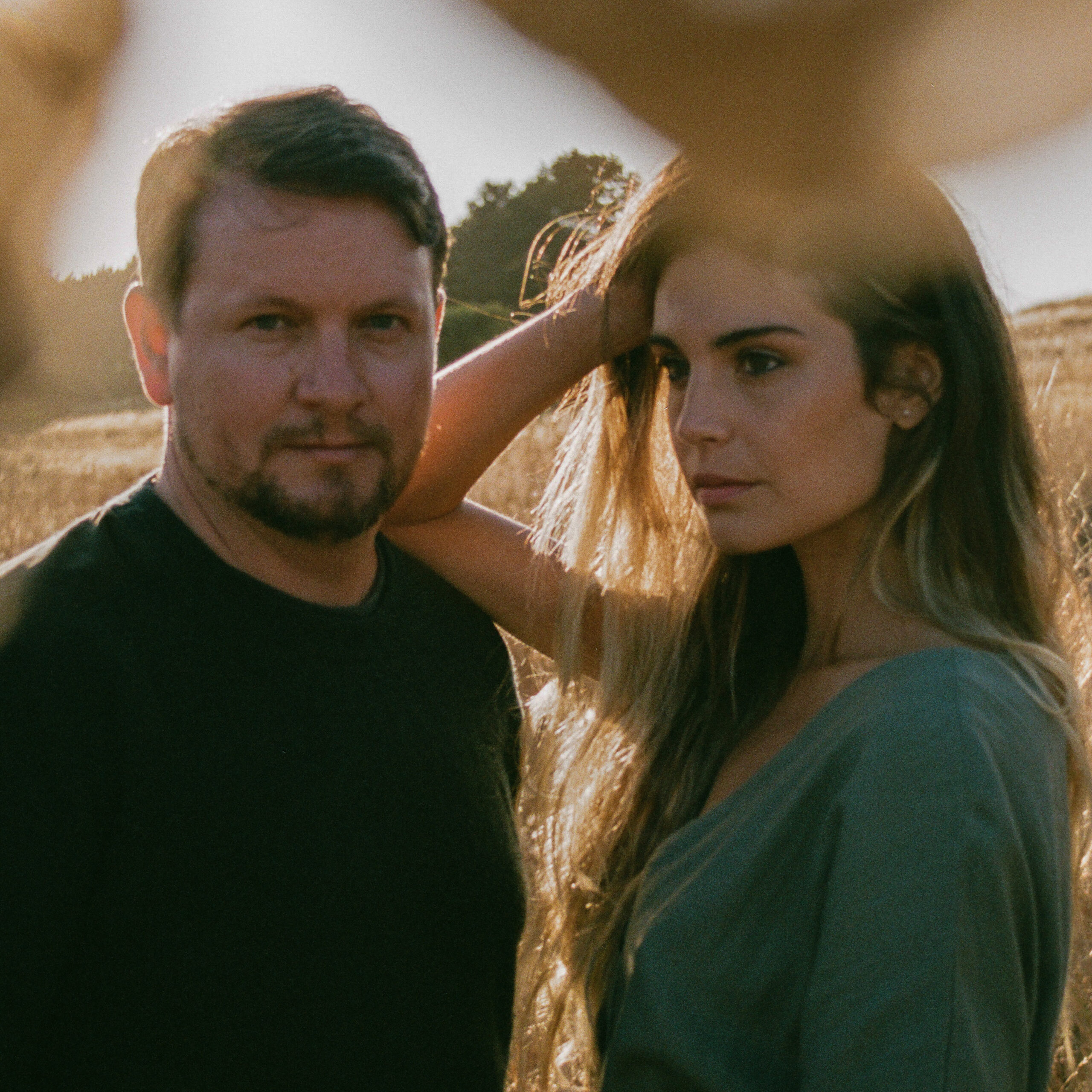 I feel as if your music transports the nature and wide spaces of Canada. How much does your home define you as an artist?
Sierra: I’d say a lot, but at the same time we feel at home on the road as well. And when we go to Europe in particular, there’s something that definitely clicks. Definitely Canada, but also other places.
Jon: Both of us grew up in very, not isolated, but big trees and cabinesque places in the woods. Growing up in those environments really informed the basis of our personalities in a lot of ways. So it’s hard to get away from that influence. I don’t think we would ever want to, but it’s just a part of our sound and our being. Experiences with other people or with events or being inspired by someone’s art or by a place in itself. But more often than not, it’s not a place that inspires things. It’s more the feelings and interactions and experiences.
Sierra: Just things that you walk away from and remember for while after. Whereas I find that sometimes when you’re at home in the place you’re used to all the time, those memories become squished into one big thing. And so the more you go out and experience different experiences, the more stories you have to write about.
Jon: Often too, that’s part of the thing when we’re talking about the road and how it’s a nice fruitful time for creation, you just feel inspired. Whatever you’re doing in your life, you feel inspired when you do what you want to do, or you’re doing what you feel like you’re meant to do. And when you’re having conversations with people that feel like you’re not thinking so much in a way, you’re just experiencing. And that makes you want to create and you feel excited.

Do you set goals with what you want to do with Ocie Elliot? Or does it happen the way it happens?
Jon: That’s a good question. I think we have had had goals for sure. And now the pandemic has obviously disrupted it for sure, but it’s also changed a lot of things. We’ve missed out on almost two years of touring will be by the time we’re back on the road. So we’ve had to shift our goals in a way. And now we’re at a place where we feel like we almost want to start setting some more goals.
Sierra: Yeah I agree. It’s just little things like, for instance, some of our goals were playing with big bands at festivals or going on the road with big bands. And we were actually going to play at a festival with John Prine, who is one of our absolute favourite musicians. Then COVID happened and now we’re never going to have that chance again. It’s hard to set goals right now, I think it’s almost better to just be really appreciative of what comes naturally and just be excited about those things. But hopefully once this is all over, we can start having some goals.
Jon: Our goals are fluid right now I guess.

Well, is there any question you haven’t been ever asked, but you would like to share?
Jon: I don’t have any burning in my mind that we’re angry people never ask us. You asked lots of great questions. 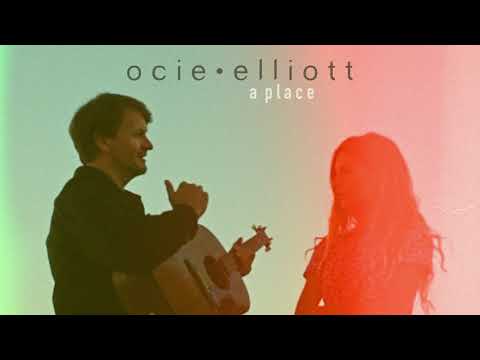