– How did you start making music – had you been forced to play an instrument somehow or was it in your own interest? What was your motivation?
I don’t think any of us were forced to play an instrument, but we were all playing around with different stuff as a hobby. Playing music came more through a shared interest in bands and listening to the same stuff. Learning to play was more about trying to play what most of the people we admired did.

– How did you meet and in which situation did you decide to form a band?
All three of us grew up together in the same area of our hometown Tromsø and have known each other since we were kids. Me and Rune were actually on our way home from a football match when we were both playing together for a local team. I think we both pretty much had been dropped from the team and were faced with a five hour bus journey back to Tromsø. On our way, unhappy with the way our once ambitious football careers had gone, we decided to make a band. We knew Esko played the drums, Rune could sing and I could play the bass, so it was pretty easy. It was more a “why didn’t you ask before?” situation.

– What musical influences do you have?
As with most bands it would be impossible to name just a few influences. From the start we have really enjoyed trying to implement different influences into our music. For the first record we did together, as Washington, we were influenced more by the Americana scene than say the second record, Astral Sky, that was definitely more poppy. Then this new record is to some degree influenced by electronic music. So to name any artists would be wrong. All the way back in the late 90s when we started doing music it was all Britpop though.

– After releasing three records as ‘Washington’, you changed the band name to ‘Mount Washington’ – for what reasons did you change it and what was first, the change of the name or the production of the new record?
Both. After we did Rouge/Noir as Washington we had a break to pursue other things. Rune did a great solo record and Esko and me were working with different stuff. When we decided to get back together, it really felt like a new start. When there was also the problem that we have had for some time with the Australian singer calling herself Washington and causing quite some mix-ups, we thought: “why not?”. And why not just do it real simple and add a Mount.

– You also moved to Berlin, for what reasons and could you try to describe how your new home influenced your life and your music?
We really wanted to do things differently with the new album. Our previous records we all wrote and worked on in Tromsø before recording them somewhere else in Norway. This time we wanted a change of scenery and new input. Not just with regards to a studio but also with the writing process. Being in Berlin you do get exposed to a lot of electronic music and even though it wasn’t the reasons for us flirting with some electronic stuff, the city’s obsession with techno might have sneaked in to our songwriting minds.

– How do you normally work on songs? What are the steps/processes, what are the usual problems of finishing a song? Did this change due to your new home?
It all starts with someone bringing in an idea for a song or a sequence. Usually, it is Rune who does this, but sometimes also Esko and me. Then we work on that idea together. Sometimes there isn’t too much to do if most of the song is finished. For this record we really didn’t want to plan to detail, as we still wanted to keep our options open in the studio.

– Could you tell us something about the production process of ‘Mount Washington’? How long did it take, where did it happen, what were the difficulties, how did you prepare for it? What was the best, what the worst moment? Most told anecdote?
We started working with the new album late 2010 and recorded it half a year later, last summer. It was a pretty hectic as we also did a few shows around Europe while we were working on new songs. Intentionally, as we wanted to keep some of our live feeling on the album. The recording was done in LowSwing in Berlin with Guy Sternberg, who was a delight to work with as a producer. We then had David Newfeld come in to mix the album. I always find recording an album a bit of an emotional rollercoaster. There’s the thrill of hearing things work on the one side and the despair of them not working. At the end, sitting with an album you feel content with is the highlight.

– ‘How Does It Feel?’ is one of our favorite songs – can you tell us what it is about, how it was done and if there is a story behind it?
It is actually the only song where I came up with the whole idea of the song and also wrote the lyrics for. I sent a sketch I had done at home to Rune and he really interpreted it well. The others in the band claim it is the harshest lyric we have ever put out, but even though it may come across as a bit dark, it is actually more of a comment on relationships and their inevitable power struggles. How things don’t really turn out the way you want. It was originally just done with a few synths and vocals, but when the other guys came and put their stuff on it, it all made more sense musically.

– How would you describe the development of the band from the first record to the new one in retrospective according to the sound of each record and to you as a band?
As I mentioned before, all the albums are different in both sound and structure. We have always been a band that have wanted to change things around from album to album and I think we have managed to make four quite different records. The best thing about it is that people have responded well to all of them. Many of the fans that came to our first shows in Germany still come back and buy the new stuff and come to our shows. Despite us having changed considerably in that period.

– Each of your records has a different sound, the new one as example has become some kind of ‘electronic’ – for what reasons does your sound change? Is it an unconscious development or are you trying to push boundaries in our sound and to invent yourself new every time?
That the electronic influence is subconscious is a bit too harsh, but at some level it is also true. The electronic music scene in Berlin does get to you, whether you want it to or not. Then again, I don’t think you can actually say that it was moving to the city that encouraged this electronic influence as you say. As you suggest it was the stuff we were all listening to and exactly that ambition to do something different, as you so rightly mention.

– In what situations do you write songs/lyrics/which themes inspire you to write songs?
Well it would be a bit unfair for me to comment on the lyrics and themes too much as Rune has written 99,7 % of it. Then again, I do think Rune’s songs has this in-the-moment feel to them. To me, they basically capture a certain feeling and most of all a certain time. Each record has a different approach thematically and just as the music the latest one is more direct, if you ask me.

– As you are now living in Germany since more than a year – how’s your German and what were the first things you had to learn in the new language?
I wish I could have written all of this in German, but there is still some way to go. Being Norwegian, it is quite easy to understand what people say though. So we definitely understand more than we speak. In other words be careful with what you say in German behind our backs, we understand more than you think.

– What do you miss in Germany that you had in Norway?
The sea, better fish than this bangasius, the climate, Norwegian caviar, Scandinavian blondes and of course Norwegian brown cheese.

– What are your next plans?
While writing this I’m in the tour bus on the way to our show in Magdeburg, the third of over thirty shows this spring. After that we are going to Norway to promote and release the album there. Then rest of Europe.

– What are you doing if your not making music?
We all have different projects. You might not know that Rune has a chess rating of over 2000 (which supposedly is really good) and that Esko is one of Berlin’s most feared womanizers.

– Which song would fit to your actual situation?
Kraftwerk – Autobahn.

– Which song makes you dance independent of your situation?
Four Tet – Sing.

– How would your ‘Bedroomdisco’ look like?
I have a favourite bar in Hamburg, the Crazy Horst. It is a mix between an amusement park, a disco and a posh bar. The perfect setting.

– Who did fill out this questionnaire?
Andreas. 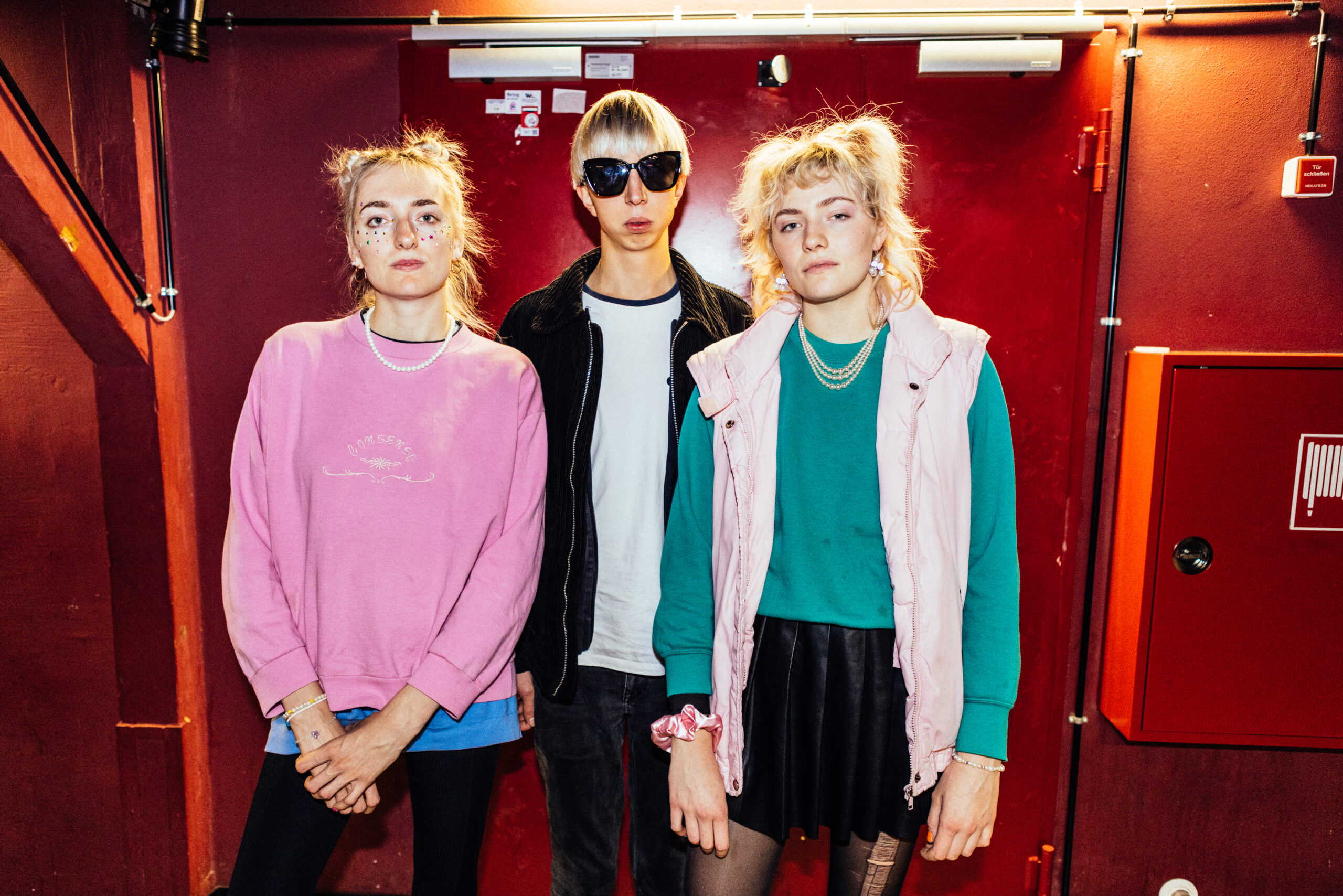